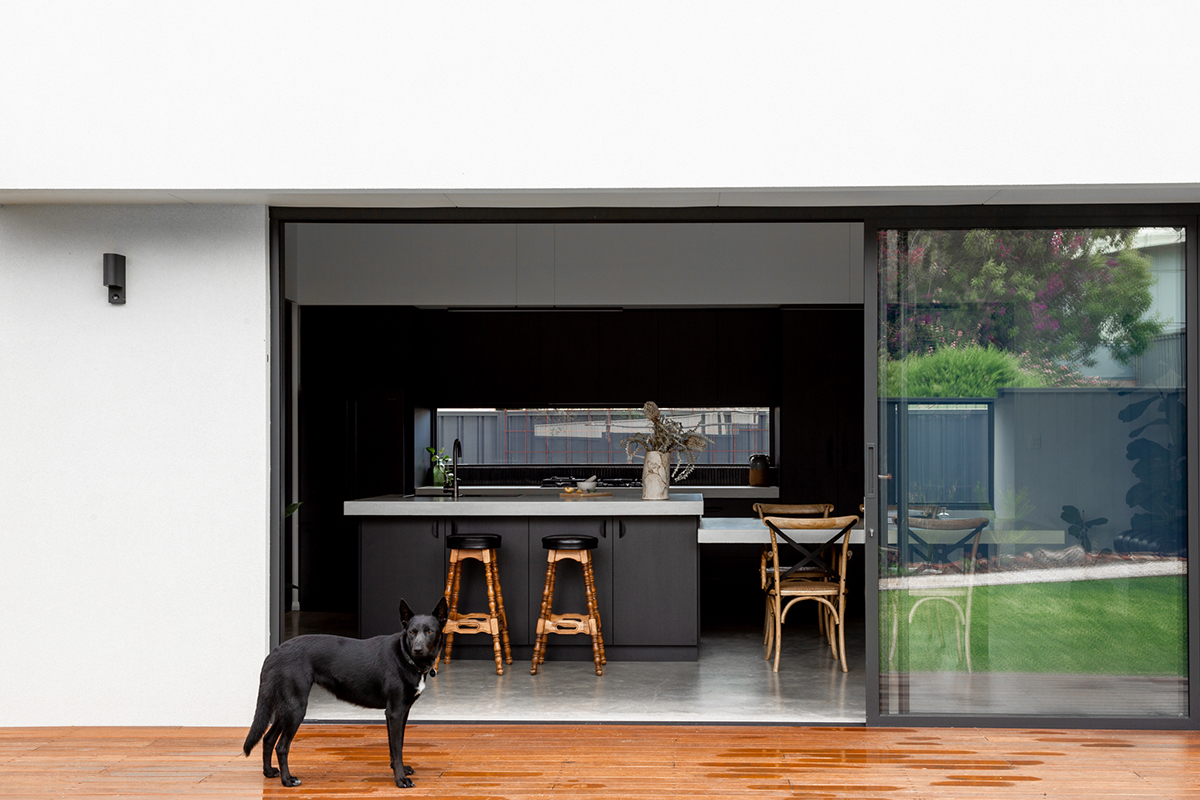 Building Outside the Box: The Corry

As featured in the August edition. 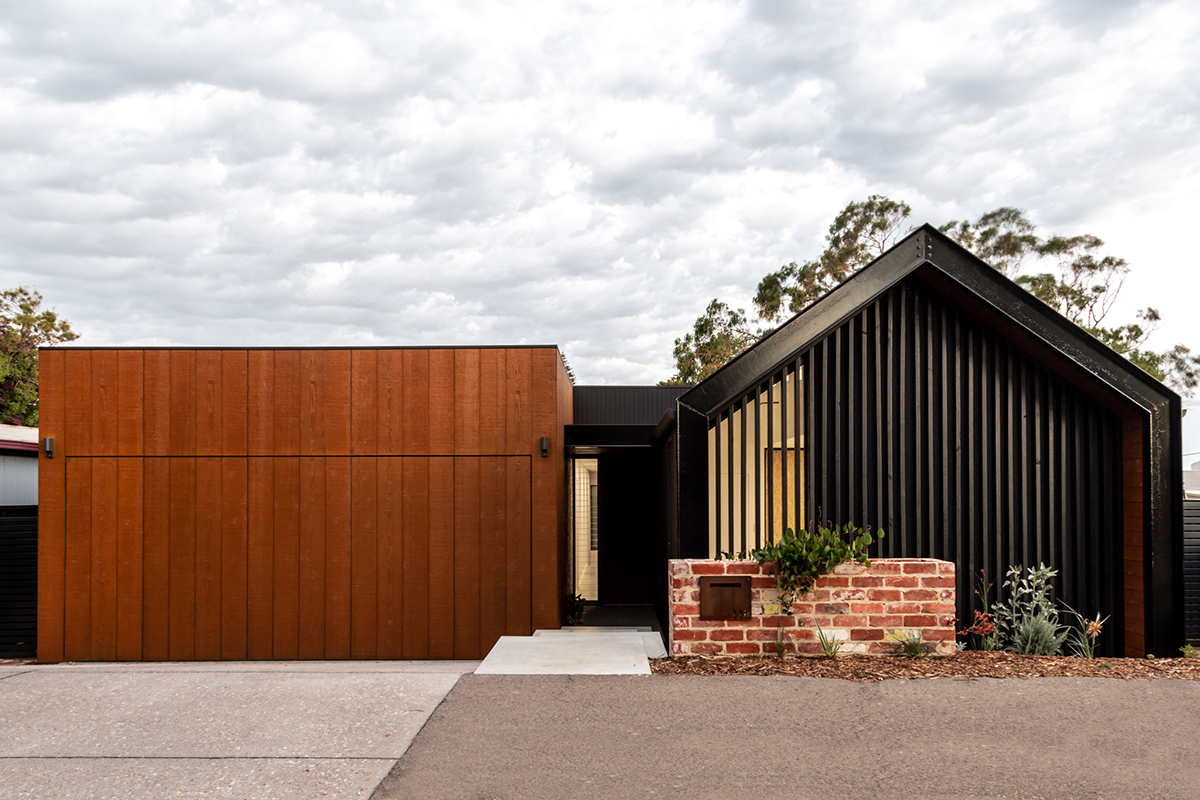 Hidden in plain sight towards the southern end of Corry Street is an unassuming house with big impact. Upon a fleeting glance, you’d be forgiven for mistaking it for a shed; its single high-pitched gable, framed by an exposed steel beam, more at home in the industrial area of Esperance, than on a residential street just a stone’s throw from the centre of town. Upon closer inspection, however, the home suddenly demands attention. Bold and industrial, it entices passers-by to look closer, trying to catch a glimpse inside. Between a timber panelled double garage and a front window masked by vertical timbers, generous concrete slabs form steps that lead down the natural topography of the block and towards the front door. The door is a statement in itself, designed and brought to life by a Fremantle-based metal artisan. Inside, modern minimalism hides intricate eco-conscious features. ‘The Corry’, as it is lovingly referred to, is so much more than meets the eye. 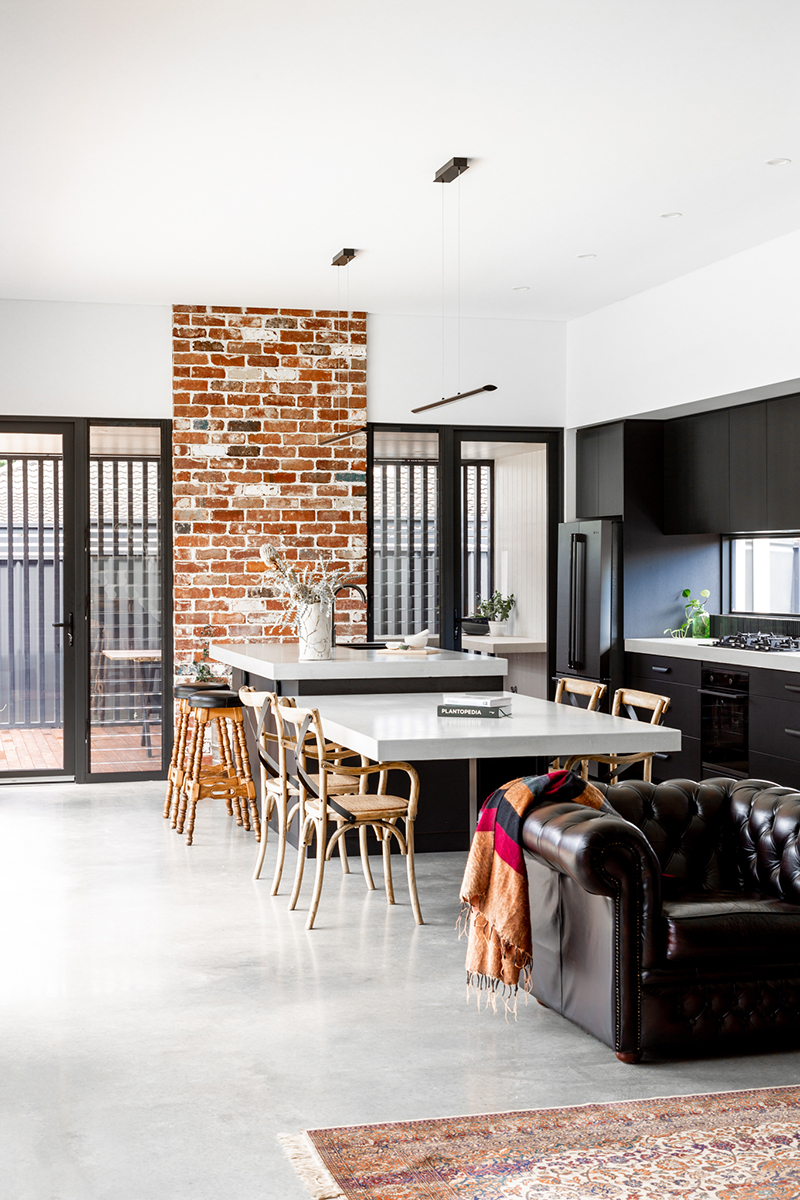 The Corry’s owner Lachie Mitchell spent much of his early 20s working in Perth as a carpenter. After returning to Esperance, he bought the empty quarter-acre Corry Street block in 2018 with the aim of building a home using ideas inspired by some of the cutting-edge houses he had worked on in the city. Together with Greg Horan Construction and Perth-based Dalecki Designs, Lachie brought this home to life. “I wanted to do something in Esperance that was different from the norm,” Lachie, now 27, says. “Not just in terms of the overall aesthetic but in the construction of the house, too. I wanted to bring more modern and passive aspects to building in Esperance.” One such idea was the construction of an outdoor toilet on the block prior to commencing the build, thus avoiding the need for a portaloo and its associated environmentally-damaging chemicals. The toilet remains in the backyard of The Corry and is not only used when entertaining outside but acts as a small garden shed, too. It is the quintessential Australian backyard dunny, built with corrugated tin from an old shearing shed on Lachie’s family farm in Gibson; it is a nod to years gone by in a home designed for the future. 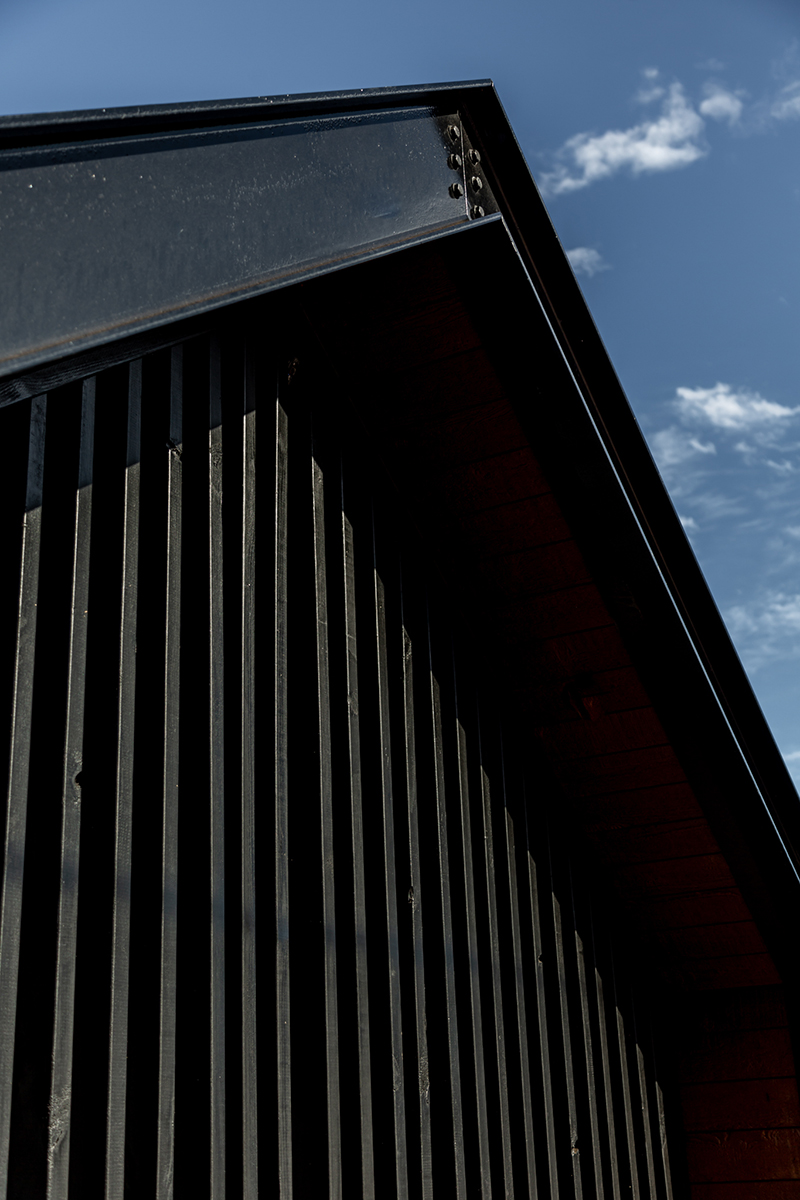 It was imperative for Lachie that he build the home as sustainably as possible, using materials that were recycled, sourced locally, or were at the environmental forefront of construction. Recycled bricks, exposed in several parts of the home and used to create a combined letter and planter box at the front of the house, came from Perth. The sliding wardrobe doors in three of the four bedrooms, as well as the cladding on the garage, are made from timber chips and pulp that were headed for landfill, while steel beams from an industrial demolition project make up the bones of the home’s outdoor entertaining area. Raw concrete benchtops in the bathrooms and kitchen, in addition to the inbuilt dining table, were handcrafted by Lachie, negating the need for foreign materials and their associated carbon footprint. “There is so much waste and unnecessary environmental impact that comes with getting a slab of stone from wherever in the world,” Lachie says. “Using concrete was just another way to keep everything as local as possible.” 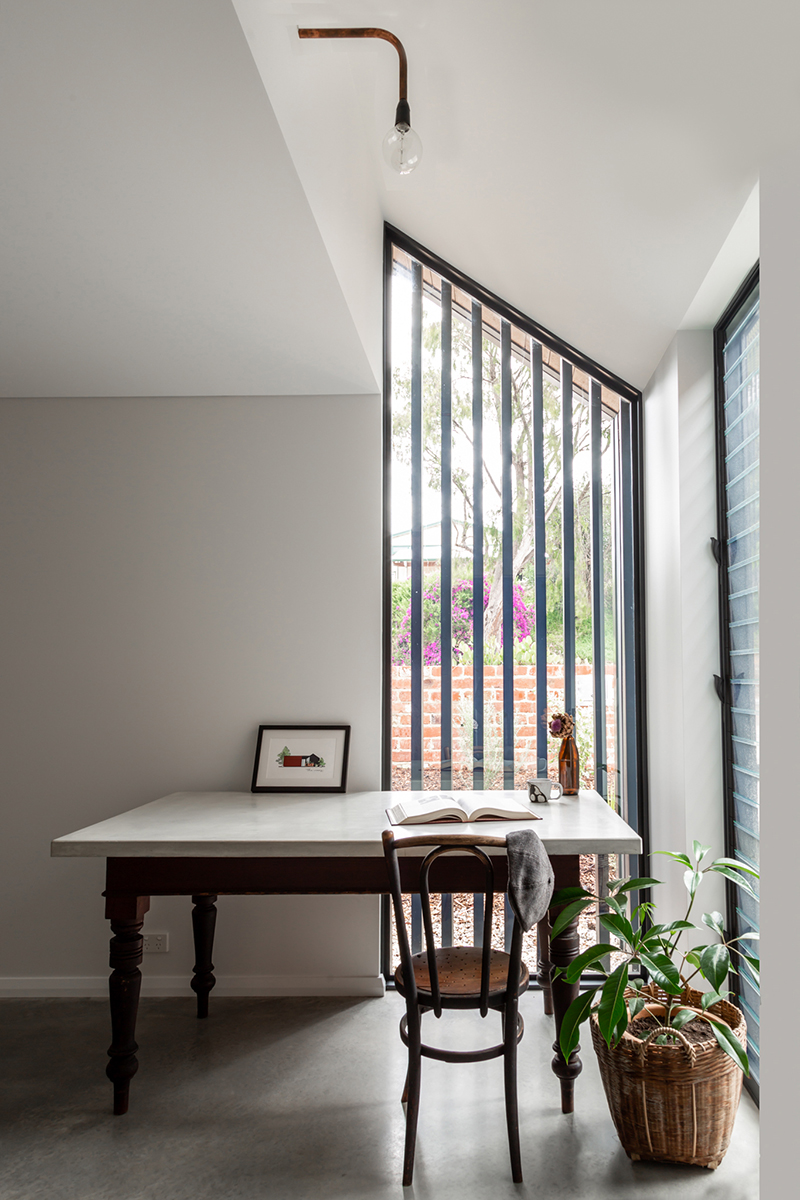 Despite burnished concrete flooring throughout the home and no window furnishings, The Corry is as warm in winter as it is cool in summer. The home is built using passive design concepts, with no heating or cooling required. Floor-to-ceiling sliding doors in the kitchen allow for northern light to stream in most of the day, charging a solar passive bank on the concrete floor. The thermally insulated glazing in the doors ensures temperatures are kept mild, ranging between 19 and 26 degrees year round. “We’ve found there’s only been a week or so in winter where we’ve needed to put a jumper on inside,” Lachie’s partner Katie White says. Lachie adds, “Last Christmas, when it hit 40 degrees, we had 12 people in here and it was completely comfortable. No aircon, no worries.” Louvers also allow for crossflow ventilation, cooling the home on warmer days. “We can open up the house in summer and the south-easterly will act as a natural air conditioner,” Lachie says. 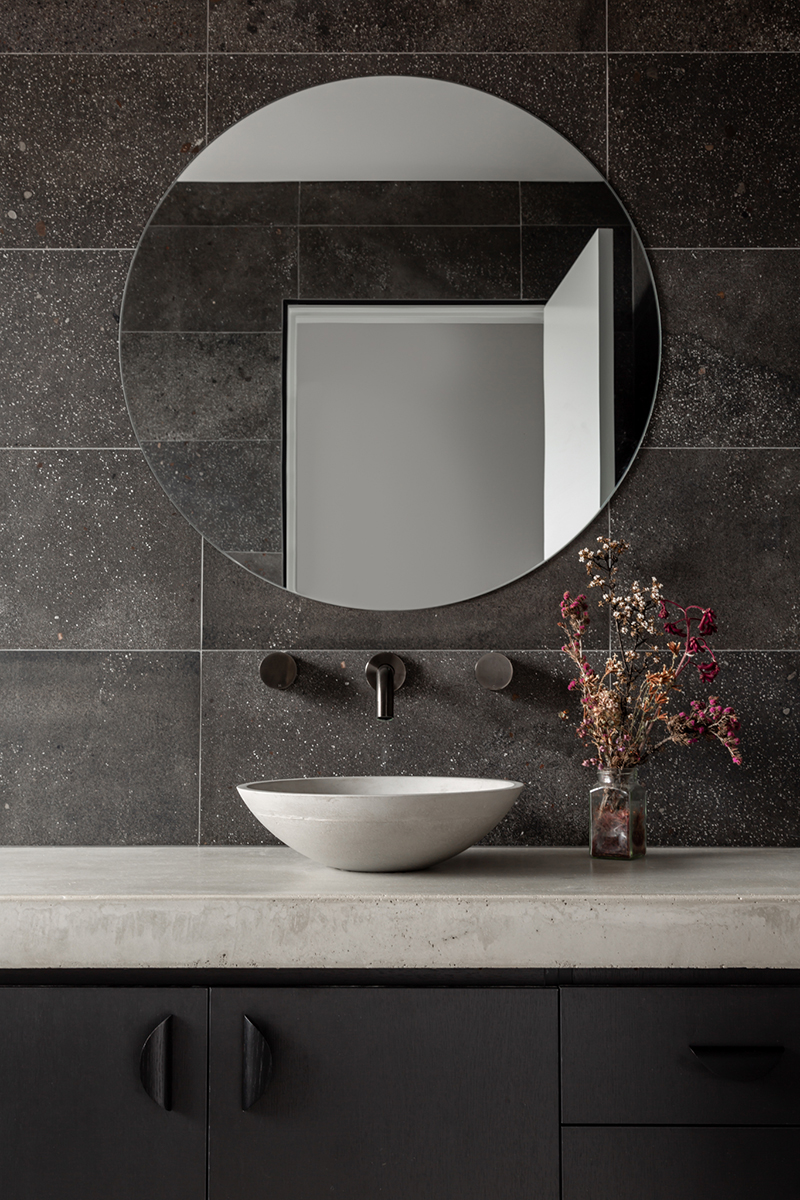 The design features aren’t just good for the environment but are financially beneficial, too. Lachie estimates his power bills are significantly lower than a standard 4 x 2 home. High windows also keep electricity costs down, allowing an abundance of natural light to enter the home, thus minimising the need to turn on lights. Water usage is kept low, too. Rainwater is used in much of the home and the low-maintenance, mostly native garden doesn’t have reticulation. Botanist Katie carefully chose plants that were easy to care for, attractive to birds and smelled great, as well as provided privacy from neighbouring properties. “I thought about the garden functionally and how it will interact with the home,” she says. 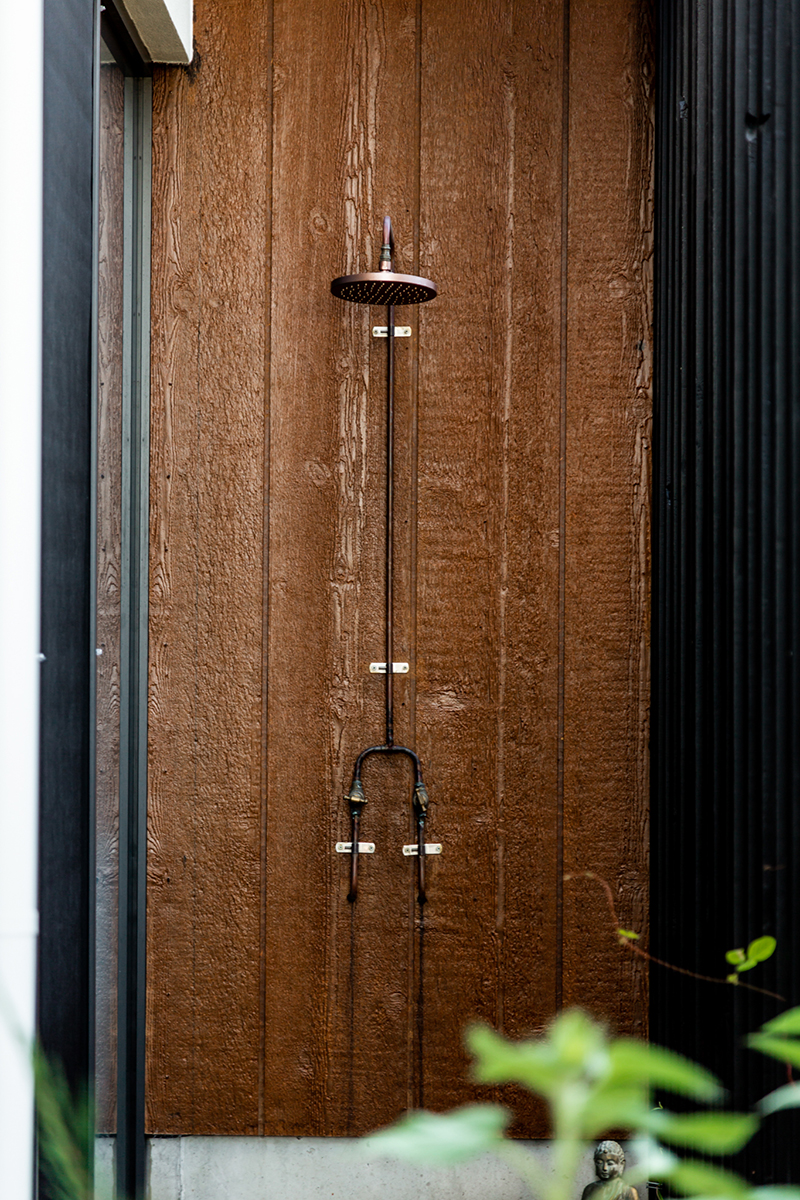 After a year in The Corry, Lachie is now looking to sell. Lachie has had a lot of interest in the home since putting it on the market, suggesting local buyers value sustainable living just as much as Lachie does. He says he has received an overwhelmingly positive response to the home from prospective buyers, as well as family and friends. Lachie and Katie agree it will be bittersweet when the home sells but they’re looking forward to what comes next, with Lachie having just been granted his building licence under construction company Artique. “It was such a learning curve, implementing all these ideas,” Lachie says of his first complete home. “I can’t wait to do it again and try new things.”

Behind the Scenes: Upward Spiral Roasting