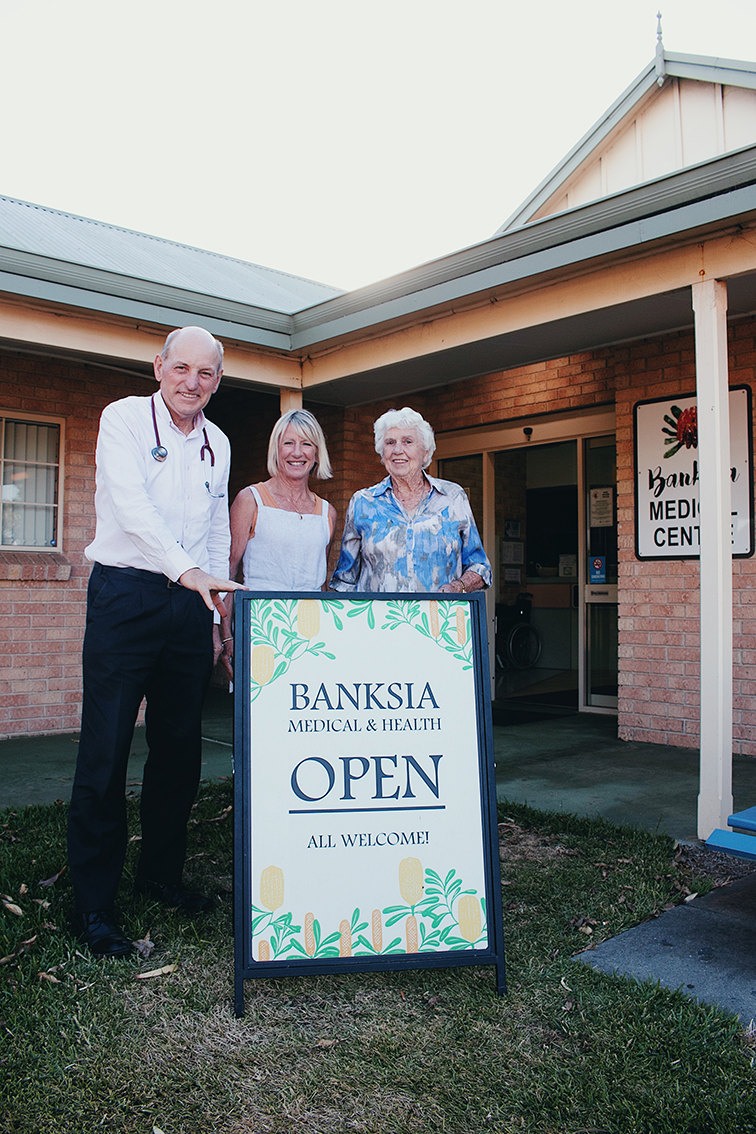 This month, Banksia Medical & Health, formerly known as Banksia Medical Centre, celebrates 40 years of heritage, passion, service and memorable times since first opening its doors in 1979. The practice was established on February 5 in 1979 by local physician and later politician, Dr Graham Jacobs, in a little old house on 47 Dempster Street. To mark their 40th anniversary, we have looked into the history of Banksia Medical to share their story and celebrate a valuable past and bright future for health care in Esperance.

Dr Jacobs was born in Benalla, Victoria. His family were new land farmers and moved to Esperance in 1955 to settle on a farm at Lort River. Dr Jacobs went to Perth to attend high school at Swanbourne High School and went on to study at the University of Western Australia where he was awarded his Bachelor of Medicine and Surgery. In May 1978, he married his wife, Kathryn, and moved back to Esperance later that same year. The following year, at age 29, Dr Jacobs opened the doors to the practice under his own name, which later became Banksia Medical & Health.

At the time there were only two employees working in the practice, his wife and nurse, Kathyrn Jacobs, and practice manager Betty O’Brien. Starting off with only two patients, Dr Jacob recalls long days staring out the window waiting for the next client potential client to walk through the door. Much to his surprise, the practice grew quickly and in the first six months he was seeing up to 20 patients per day. In 1985, with little room to grow as a business, the ‘little old house’ was torn down and rebuilt into the practice that stands today.

During his career, Dr Jacobs practised obstetrics for roughly 25 years and delivered around 50 babies per year. He says it is quite funny having old patients come up to him on the street to introduce their now older child he once delivered. There have even been a few instances of babies he has delivered later becoming pregnant themselves and delivering their babies too. In 2005, he hung up the obstetrician hat as he moved to part-time, a decision he made to free up some time so he could run for politics.

Being a surgery in a rural, isolated town like Esperance, finding doctors committed to moving the distance and sticking around can become quite a struggle. Since the doors opened, Banksia Medical has seen doctors come and go, and one point the surgery held a team of up to eight doctors. Dr Jacob mentioned his continuous effort to encourage students from rural areas to enrol in medical school. He says that doctors, like himself, who come from a rural background are more likely to take up long-term practice in a rural location–a strategy to help fix shortages of medical workers in rural areas like Esperance.

Today, Banksia Medical & Health holds only two general practitioners, Dr Jacobs, who returned to his full-time position in 2017 and Dr Manus Lochner, who joined the team in late 2016. Practice manager, Deborah McLernon, joined the team in 2015 after moving to back to Esperance from Geraldton. The practice has also recently gained a psychologist, Dr Sharon Southall late last year. As the surgery came into its 40th year it saw a full rebrand with a change of name from Banksia Medical Centre to Banksia Medical & Health, complete with a new logo to fit.

The team at Banksia Medical & Health are actively working towards engaging new and existing health services to help bring a larger range of multidisciplinary health care and diagnostic services to Esperance. Talking to Dr Jacobs about the future of Banksia Medical, he seemed eager to get some new plans in motion including potential development of skin treatments. There are also talks of an upgrade of the existing 1980’s building. With more space, Dr Jacobs is keen to open up doors to more possibilities within the surgery that will benefit the community in great ways.

To celebrate 40 years, Banksia Medical & Health invites the Esperance community to at a barbeque lunch from 11.30am on February 5 (the same day doors opened in 1979). In return, they have asked for a gold coin donation with all proceeds going to the Royal Flying Doctor Service.