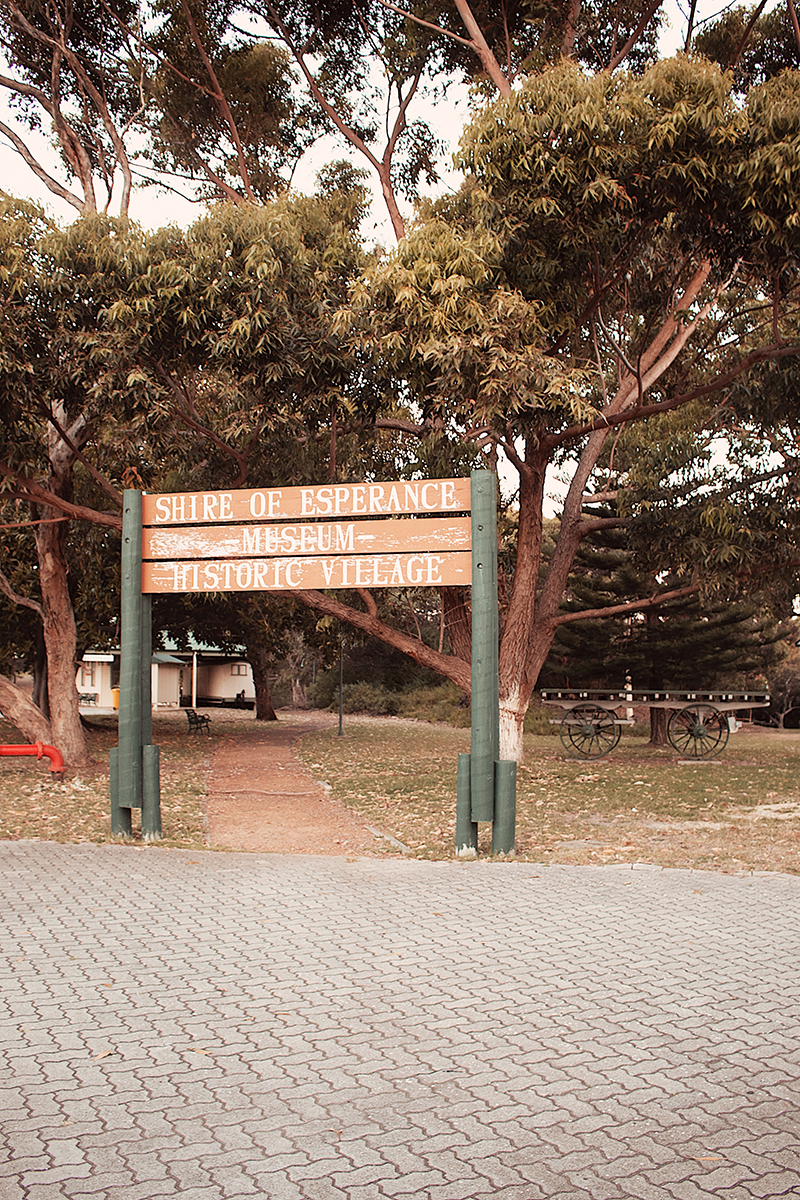 From old to new.

On Dempster Street sits a collection of buildings that are well loved by tourists and locals alike, not just for the unique and interesting shops. The Museum Village also showcases heritage buildings that are a well-preserved time capsule of local Esperance history.

Esperance’s Visitor Centre was first opened in 1967 in a small corner of Duncan Stewart’s store. As more tourists began visiting the town in the 70s, a purpose-built tourist bureau was established in what is now the Museum Village and was officially opened in 1984.

The old Salmon Gums School was originally built as a school room at the Princess Royal Mine in Norseman in 1906. When enrolments in the school at the mine site declined, the school was moved to the primary school site in Norseman. In 1926 the first school in Salmon Gums was opened in the agricultural hall, and in 1927, the decision was made to move the unused school building from Norseman to Salmon Gums. The building was partially dismantled and moved by a Ford Model T truck and by the recently completed Norseman to Salmon Gums rail service. The school eventually outgrew the building, and a new complex was opened in 1972, with the old building scheduled for demolition. The headmaster, Bart Northam, intervened, and the well-travelled school building was transported to where it now stands in the Museum Village. The Village Sheep Shop operated out of the building for 33 years until it closed down in 2018.

After gold was discovered in Kalgoorlie in 1893, Esperance, as the closest port, experienced a huge population boom. In 1895, the first hospital (which also served as the Magistrate’s office) was opened. After a decline in the town’s population, the hospital closed in 1909 and was only used occasionally for emergencies. In 1926, a committee was formed to secure a hospital for Esperance. A hospital building was purchased from Wellard, in Kwinana. In 1929, the Wellard hospital was transported to Esperance by sea, on the SS Kybra.  One of the buildings of the hospital was the Matron’s house, used up until 1971. After that time, the building was used for a Physiotherapy clinic and Pathology department. In 1983, the Matron’s House was moved to the Museum Village.

Esperance’s first Police Station was opened in 1879, and Constable George Truslove and Lance Corporal Walter Coppin were the first police officers appointed to the area. Their jurisdiction ran from Bremer Bay to Eucla. In 1927, the Police Sergeant’s Quarters was built and was in use until 1986, when a new Sergeant’s house was built.

Laurence Sinclair first came to Esperance in the 1870s, working for Andrew Dempster as a shepherd. When the gold rush began, Sinclair travelled to Kalgoorlie in 1894 to join the search for riches. On the way back, he camped overnight, and in the morning, he discovered that his horse, Norseman, had kicked up a large gold nugget with his hoof. This was the beginning of the gold rush in the town that came to be known after the horse, Norseman. Sinclair and his partner sold the Norseman mining lease, and Sinclair continued prospecting without much success. Eventually, he went back to work for the Dempsters. Sinclair’s wife, Julia, was a much-loved Midwife in the town, and they had nine children. They built the house in the early 1920s. In 1981, Sinclair’s grandson gave the house to the Esperance township, and it was moved to the Museum Village.

The church building was originally built in 1895 on Dempster Street. The first resident Minister was Reverend S. J. Rooney, who became a missionary to the Solomon Islands. After Rooney, there was no Methodist Minster in town, and the church relied on ‘missionaries’ who were stationed in Norseman. These ministers travelled by sulky or by bicycle between Norseman and Esperance, 200 kilometres of sandy, boggy track. Later, they travelled by motorbike, or on the weekly mail truck. In 1912, after a dispute over ownership of land, the church was moved down Dempster street, then in the 1920s, the building was moved to yet another site on Dempster Street. When the town’s population dwindled, the Methodist ‘Home Mission Department’ decided to dismantle the church and move it to Ravensthorpe. The remaining congregants managed to stop this move. In 1970, a new church building was built, and the old Church was moved to the Museum Village in 1979.

In 1896, with Esperance rapidly expanding and a typhoid outbreak in town, the original Hospital was built at the site of the present day Hospital on Hicks street. The hospital had four rooms - the nurse’s room, servant’s room, ward, and a kitchen/bathroom. The hospital was closed in 1909 when the town’s population dwindled. The building was purchased by Mr Baird for £77 in 1929 and was relocated to the present site, where it was used as a BnB for some time.

Built on Andrew Street in 1896, this building was originally the Esperance council office. It became the local courthouse in 1898. In 1975, the service clubs of Esperance got together to move the heritage building to its present location, the first building of what would become the Museum Village.

In 1895, Mr W. E. Elston arrived in Esperance and set up shop in this building in Andrew Street. It started as a stationery store, then became a general store, and later a bicycle agency. In the 1950s, J. E. Stewart took over the shop, becoming the first qualified Chemist in the town. The shop operated as a chemist shop until the 70s, after which it was moved to the Museum Village.

This building, built in 1900 and owned by the Daw family, came from Red Lake. It was relocated to Esperance when the Daws moved their business to Norseman. It was originally a small store located on Andrew Street, then used as an office. Doctor Tom Burcher used the building as a surgery when he arrived in town in 1966 to relieve the town’s sole doctor. Burcher stayed in town, practising in this building until 1973.

Up Next: Bob & Jim’s General Store