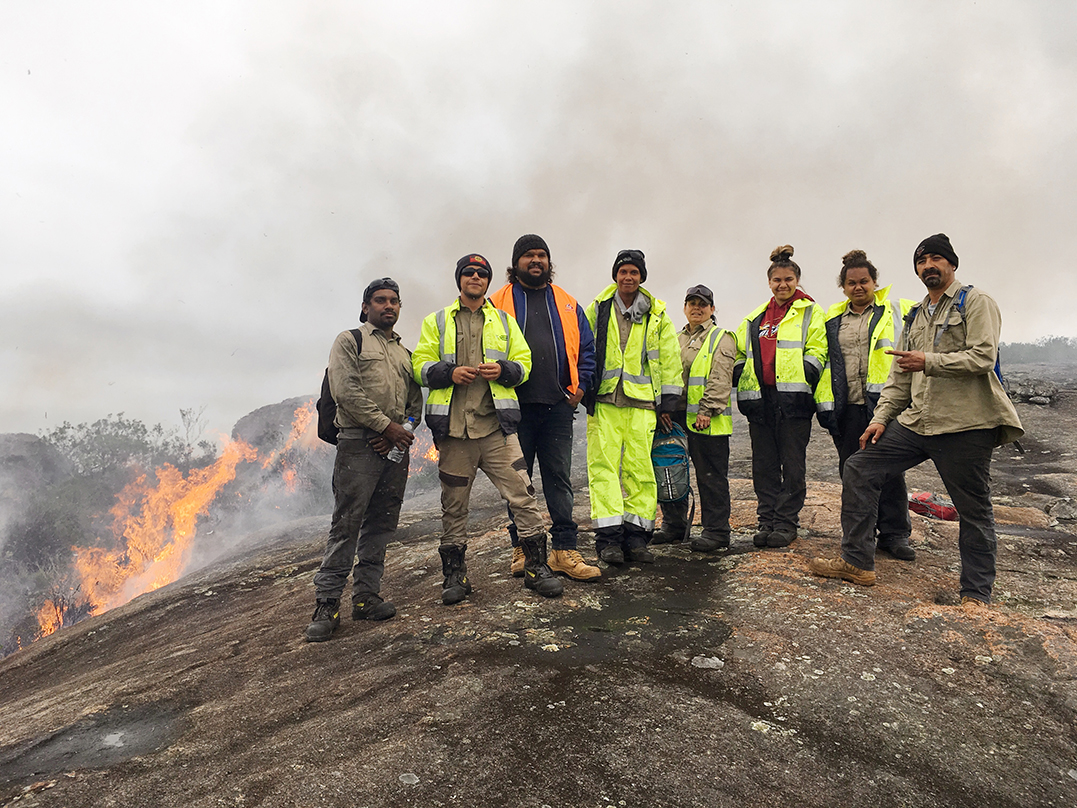 Get To Know The Tjaltjraak Rangers

The Tjaltjraak Ranger project is an Esperance success story that has caused positive ripples throughout the Esperance community. The program was launched in April 2018, as part of the Esperance Tjaltjraak Native Title Aboriginal Corporation’s healthy country plan. Tjaltjraak’s group of Nyungar Elders have long had a vision for establishing a Ranger program to help to care for the local environment, and as an opportunity for the next generation to build stable, purposeful and culturally connected lives. Established in 2014, Esperance Tjaltjraak Native Title Aboriginal Corporation manages native title over 9928 square kilometres of land around the Esperance region. The newly established Ranger program has a significant role to play in caring for that land, and for the rest of the Esperance environment.

Funded by the WA Government’s Aboriginal Ranger Funding, the Tjaltjraak Ranger program has employed 12 trainee rangers and one ranger coordinator. Over the course of the 9-month pilot program, the trainee rangers studied Certificates in Indigenous Land Management and Aboriginal Sites Work through the Esperance TAFE. Eleven of the rangers achieved these certificates, with one of the rangers going on to be Esperance TAFE’s student of the year. The rangers also underwent training in a number of other areas, including becoming accredited Bush Firefighters. After the pilot program concluded, the Tjaltjraak Rangers were able to get commercial contracts with organisations such as the Southern Ports Authority and South Coast Natural Resource Management, which has allowed the continuation of the ranger program. Under these contracts, the rangers have carried out various work including invasive species control, planting trees and fencing.

The Tjaltjraak Rangers have been involved in a number of very significant environmental protection and land care projects. Among other projects, the Rangers have undertaken survey work and monitoring of endangered species in the area, worked to control invasive weeds, revegetated areas affected by erosion, and maintained walk trails and tracks. One particularly significant project that the Rangers have undertaken is the rehabilitation and management of the large area of coastal land that was impacted by the Merivale wildfire east of Esperance in 2015. A large amount of this land has come under the Esperance Tjaltjraak Native Title claim. As this ecologically important land was previously unallocated Crown land, there was no management plan in place and no agency responsible for management. The Tjaltjraak Rangers are now able to provide much needed environmental protection and rehabilitation work. Funding assistance has been provided by the WA Government’s Coastwest program, meaning that initial important work such as Dieback management, signage, revegetation, fencing and track management has since taken place in the area.

As well as the impacts on Esperance’s environment, the Tjaltjraak Ranger program has also had a significant impact on the Esperance economy. The program has provided employment for thirteen local Indigenous people. None of the rangers were employed full time before they applied for the Tjlatjraak Rangers program, although some of them did have ongoing casual work. One of the Rangers has since been offered a job as a seasonal Ranger in the Cape Arid National Park, which then allowed another Ranger to be employed by Tjaltjraak. As well as the flow-on effects from the increased employment in the community, the Rangers program spent a significant amount of money at Esperance businesses. The training and skills provided to the Rangers in the program will also ensure that they are able to have meaningful careers in land management in the future.

Of course, some of the most significant effects are on the Rangers themselves. Rangers Bobby Woods, Ailee Woods and Kenny Spratt enjoy the work in the program and are glad to be learning new skills. As Ranger Ned Clinch says, “We’re proud to be doing something to look after our own country, and we feel like the work we do is making a difference.” Ranger Zoe Bullen adds that their families are proud of the work that they are doing. The feedback regarding the Rangers’ work ethics, skills, and capacity to learn has been overwhelmingly positive. There are hopes that the program is able to continue so that tangible benefits across enterprise, the environment and our community that comes from the reconnection of people and culture can continue to emerge. With such positive results already, this would be a great benefit to the Esperance region in many different ways.

Tjaltjraak is pronounced ‘Dul-u-rak’. The name comes from a local blue gum tree, and means ‘glow in the dark’. You’ve probably spotted this attractive tree growing by the side of the road around the Esperance area, and you’ll notice that the silvery leaves reflect light, which is where the name comes from.

Where to Spot Wildflowers in Esperance