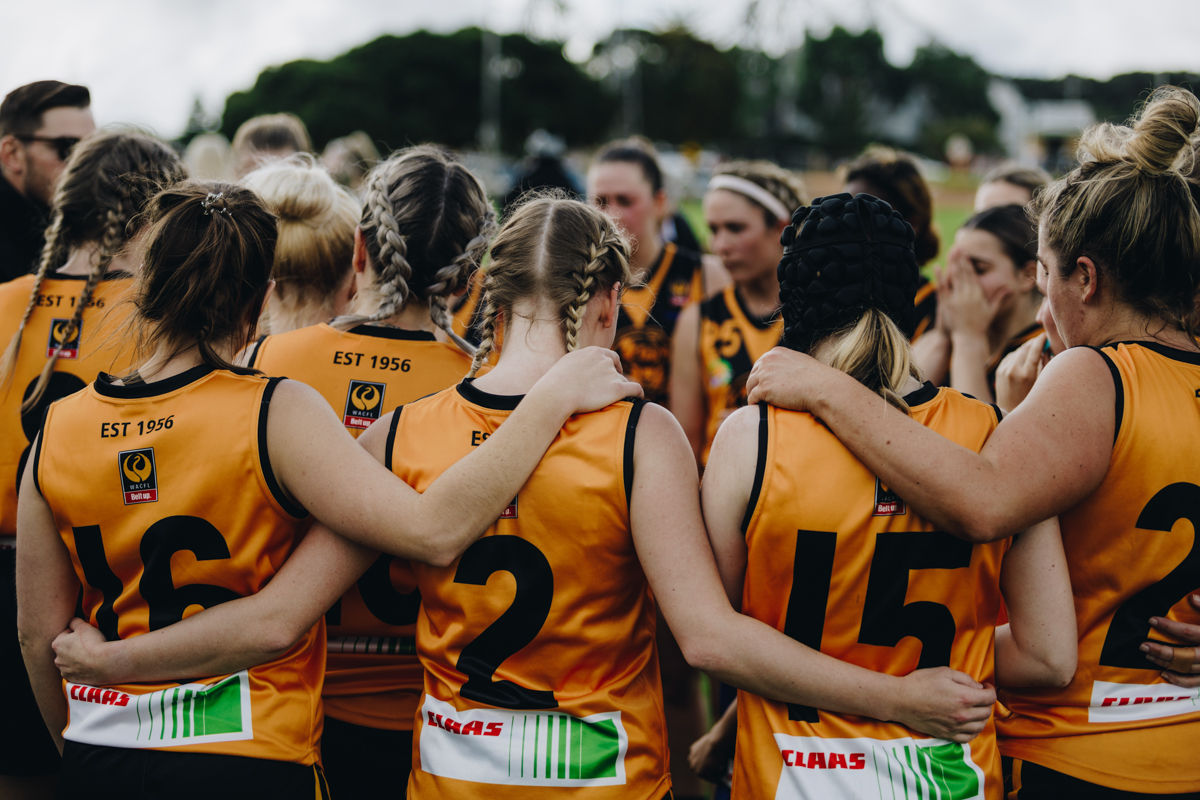 Hear Me Roar: The Rise and Rise of Local Women’s Footy

As featured in the July edition.

It’s a gloriously warm Saturday afternoon in late June. A stream of footballers run onto Newtown-Condingup Oval under the clear winter sky. The home team is versing Ports Football Club, and it promises to be an exciting match. Cars surround the oval, and the veranda of the clubhouse is lined with onlookers, basking in the sun. You’d be forgiven for thinking it was just another local footy game, but just a few years ago, this match wasn’t possible. That’s because this afternoon, it’s a women’s match. The local women’s football competition has doubled in size since its inception in 2019 and two years down the track, there are no signs of it slowing.

The first official women’s game of Australian Rules played in Esperance was in 2017, an exhibition match against Kalgoorlie. The match, which has since been played annually, identified that there were enough local women interested in playing football to begin a competition. In 2019, the Esperance District Football Association (EDFA) established the inaugural women’s competition. Two clubs – Ports and Esperance Football Clubs – participated in the competition, playing six games in the season. Nicole Fraser, EDFA Vice President and Esperance player, was one of a small handful of people instrumental in bringing the women’s competition to fruition. She says she had participated in a few exhibition matches but wanted to play in a competition that was taken more seriously. “I was tired of people treating running around the football field as a joke,” Nicole says. “Our skills would never improve if we were only playing a few games here and there.”

This year, all four local clubs have entered a team in the women’s competition, with Gibson and Newtown-Condingup Football Clubs participating for the first time. The popularity of the game amongst local women aligns with national statistics. In 2005, just under 19,000 females played Australian Rules, a number which had skyrocketed to more than 460,000 – 30 per cent of all players nationwide – by 2017. Nicole believes the ALFW competition, first telecast in that same year, was the catalyst for the spike in popularity. “It’s no longer viewed as just a males’ game,” she says. “There has been a shift in attitude amongst people.” Ports player Laura Bennett agrees, saying AFLW has given the sport greater visibility. “It’s provided girls and women alike something to follow and aspire to,” she says.

Prior to the local women’s competition, girls could not continue playing football after they turned 15, when they were no longer eligible to participate in mixed gender divisions. The lack of opportunity to continue the sport into adulthood, as well as the popularity of more traditionally ‘feminine’ non-contact sports, was a deterrent to young girls taking up the sport altogether. As a result, most women had never played football prior to the competition being established. “I didn’t even know the rules when I started,” says Gibson player Clara Graham, who stepped onto the field for the first time this season. “I’ve been watching footy for years, but it’s only now that I’m out there playing myself that it’s all making sense.” Women have long played an important role in football clubs, supporting their husbands, sons and brothers, working in the canteen, and sitting on committees. But being a part of the physical game is very new, and something Clara says is overdue. “It’s such a big part of Australian culture and it’s about time women became part of it instead of just being spectators and facilitators,” she says. “We can still be those things but also have the option to play if we want to.”

When the idea of a women’s competition was first floated, there was some pushback from the local football community (it was “probably 50/50,” says Nicole). But since the competition began, female players across all four clubs say they’ve been welcomed with open arms. Esperance player Shyanne Thomas-Mirrielees, or ‘Shyza’ as she’s known, says the amount of support the women have received from the men at her club has been “absolutely astonishing,” saying they felt welcomed from the moment they stepped foot in the clubrooms. “They are very supportive of our development, regularly helping out and giving us advice and words of positive reinforcement,” Shyza says. “I don’t think any of the women’s teams would be as successful if not for the club members who have supported them so much.” In all four clubs, the men’s and women’s teams train at the same time and have dinner together once a week, and many of the male players are there to support the women at their matches, whether they be running water or cheering from the sidelines. “There is no separation,” says Laura. “We are just as much a part of that club as any other person.”

While the scores in the women’s matches might be lower than those in the men’s, the physicality of the game is just as present. With many men having played since childhood, the women say it simply comes down to experience. “It’s second nature for the men,” says Newtown-Condingup’s Tenique Adams. Shyza believes this doesn’t mean the games are any less exciting to watch. “The blokes look more polished … but with the women, you don’t miss out on those big kicks, hard tackles and a want for the ball,” she says. “And that’s the reason people watch the sport.” As the competition grows and young girls are inspired to take up the game, the women’s skills will only improve. According to Nicole, the sport has a bright future in Esperance. “There are increasing numbers of girls participating annually in Auskick and the junior grades and they are the future of the female comp,” she says. “The EDFA will continue their support and carefully plan for the future, and I am confident that the competition will continue to grow in years to come.”

Up Next: Mudjar Aboriginal Corporation