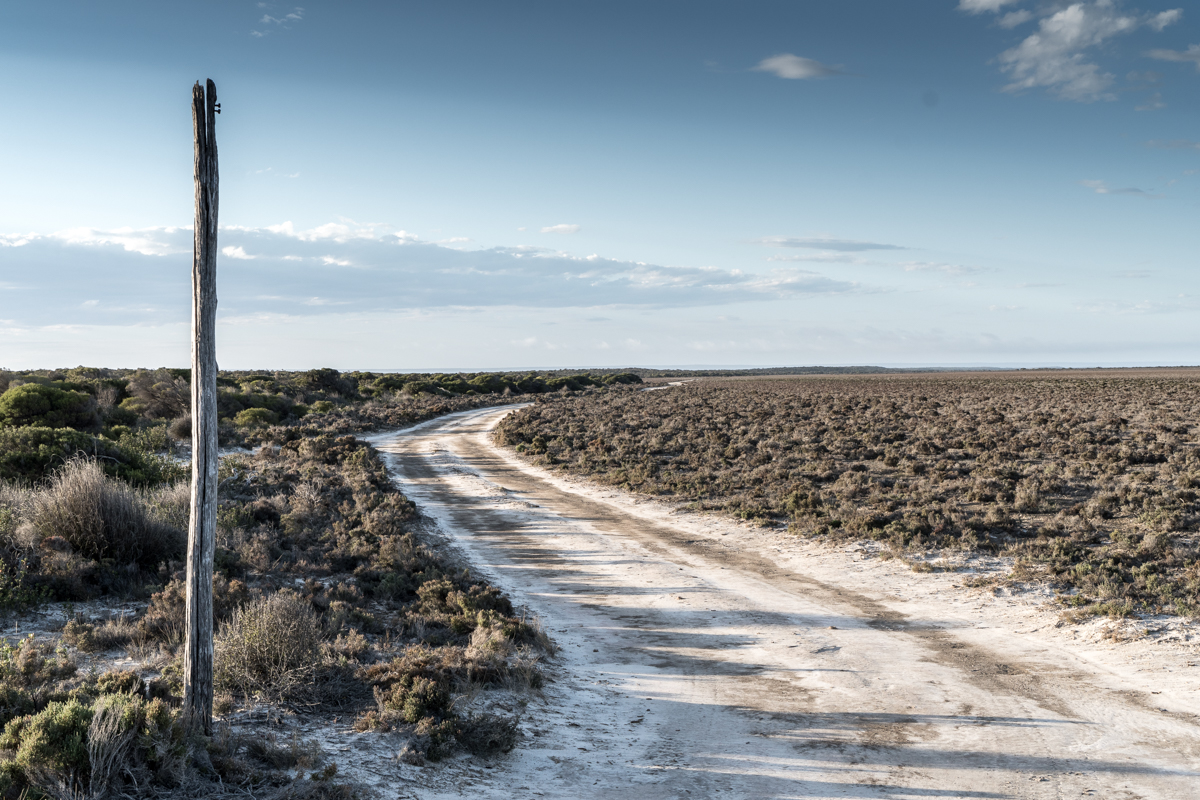 As featured in the August edition. 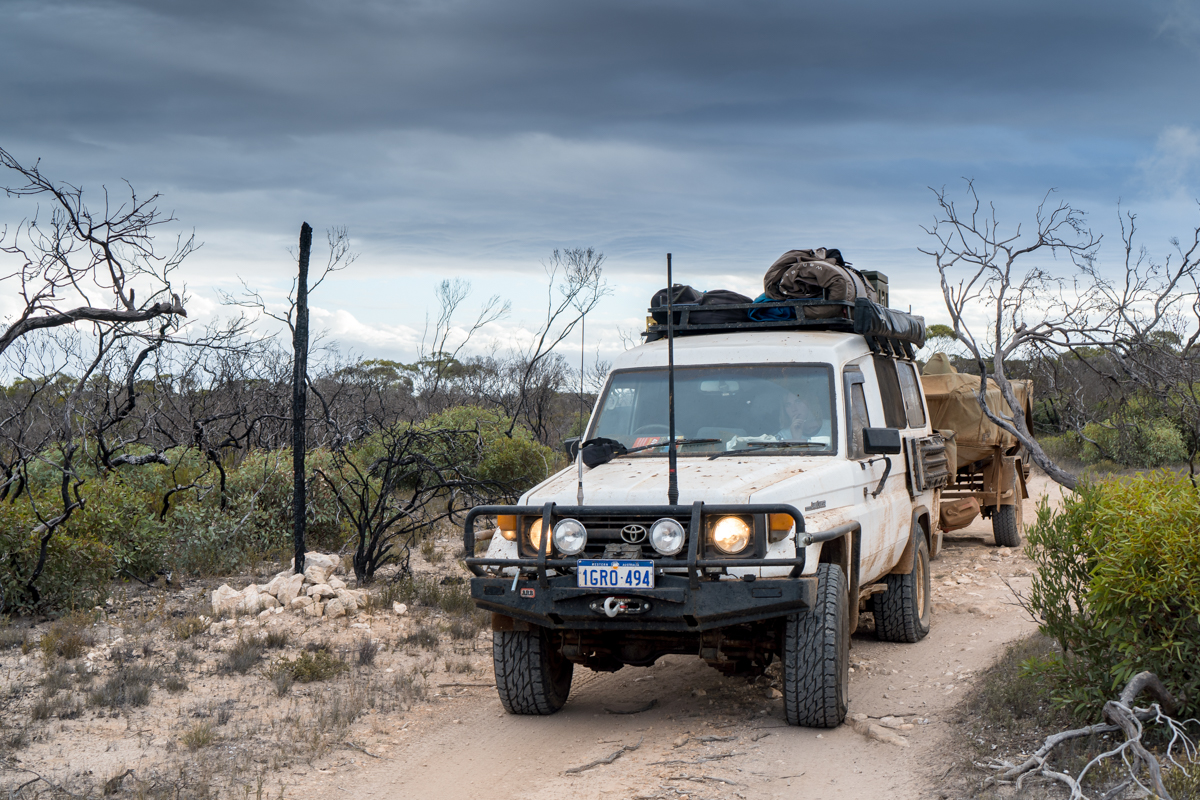 There are four bars of mobile signal at the Caiguna roadhouse. It is a remarkable thing, and not only because we are way out in the middle of the Nullarbor Plain but because of where we have just been. For the last week me, my partner Dorje and our little old dog Jezza have travelled WA’s Old Telegraph Line. There isn’t much left of it now – just a few burnt out old timber bush poles and the odd strand of rusty wire – but this was once WA’s only direct line of communication with the outside world.

In the late 1800s telegraph was a new technology transforming the speed at which people could communicate, but 1200 kilometres of harsh country stood in the way of a link between WA and the rest of Australia. Work began in 1875 to connect existing stations at Albany and Port Augusta. It was an epic task. For three years men on packhorse battled through rough mallee scrub, sandhill country, and waterless cliffs, erecting timber bush poles and running a single strand of galvanised iron wire between repeater stations.  They followed a vague route made only a few years earlier by Edward Eyre, the first European explorer to cross the Nullarbor. Today the stretch of Old Telegraph Line between Esperance and Cocklebiddy is a 500 kilometre four-wheel-drive trail. It runs along some of WA’s most remote coast. Following the line is not an easy journey, but for experienced and well-equipped travellers it follows an incredible story through some of Australia’s most raw and beautiful country. 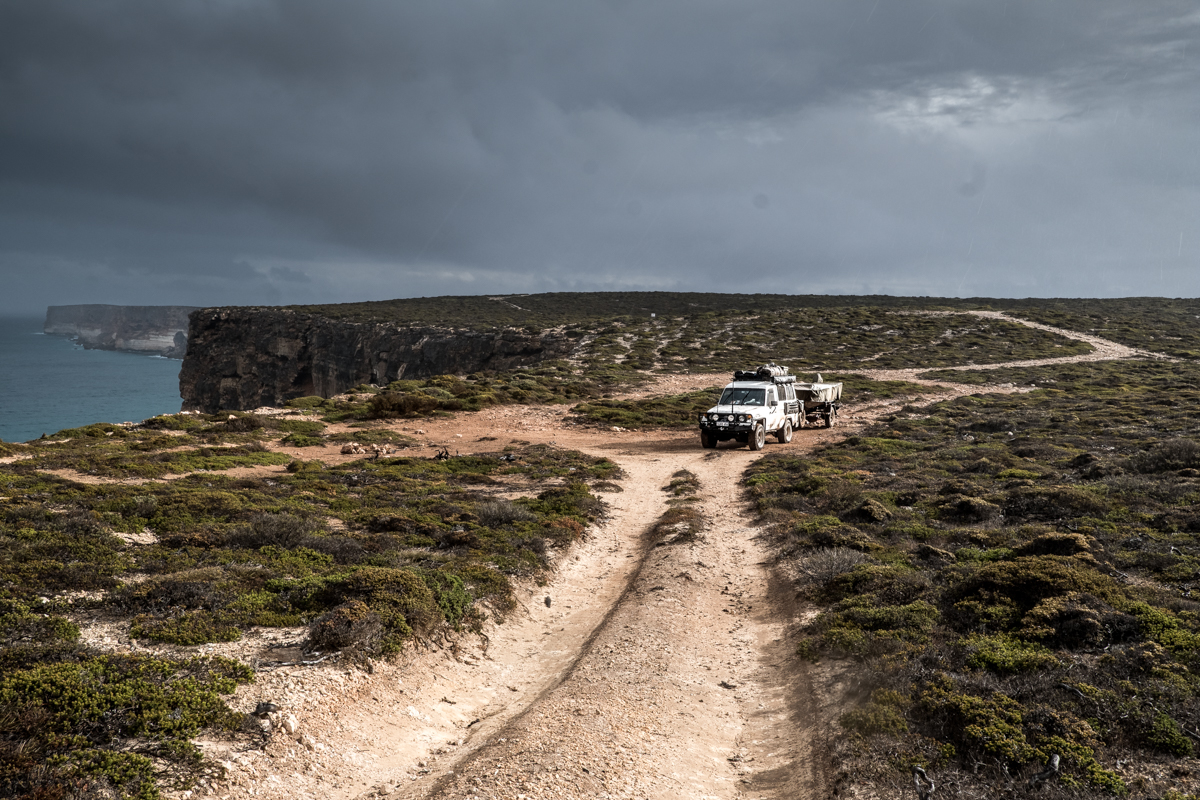 We’re travelling in an old Land Cruiser Troopcarrier, and our vehicle is fully loaded. We’re carrying 200 litres of diesel, 100 litres of water, spare parts and tools, camping gear, an EPIRB, a boat, and enough food to last a couple of weeks.  We need to be prepared because a misadventure out here could be fatal. In 2020, Perth uni student Lachlan Marie bogged his dad’s Jeep in an Israelite Bay salt-lake. After unsuccessfully trying to recover his vehicle he had to walk two days to find help, drinking water from muddy puddles along the way to sustain himself. This country is as harsh and unforgiving as ever.

Our journey begins at Point Malcolm. It is a significant demarcation, where the Recherche Archipelago ends and the Great Australian Bight begins to curve up. It is also the boundary between traditional Noongar and Ngadju lands. To the Ngadju, Point Malcolm was known as Jawarangya. It was an important meeting place and stopping point as they travelled their country. Food was plentiful here. The men hunted and trapped tamar wallaby and emu, and women gathered bush cucumbers, oysters, cockles, and periwinkles. Families fished for butterfish, salmon, and skippy.

Point Malcolm also helped to save Edward Eyre’s life. When he arrived here in 1841 his 3200 kilometre overland journey had just taken a turn for the worse. Eyre and his party had gone beyond where any other European explorer had been before. Three Aboriginal guides led him and his trusted lieutenant John Baxter across the Nullarbor. They had spent weeks walking along the waterless sea cliffs. The men were severely dehydrated and half starved, and one night, two of his guides rebelled, shooting and killing John Baxter.  They took most of the party’s rations and disappeared into the night. One guide, Wylie, remained with Eyre. They struggled west together until they made it here, to Point Malcolm. It was a relative oasis. Nearby they found running water for the first time since Streaky Bay, and there was good grazing for their horses and plenty of food. They camped here for a week, restoring themselves on kangaroos, possums, crabs, and fish. 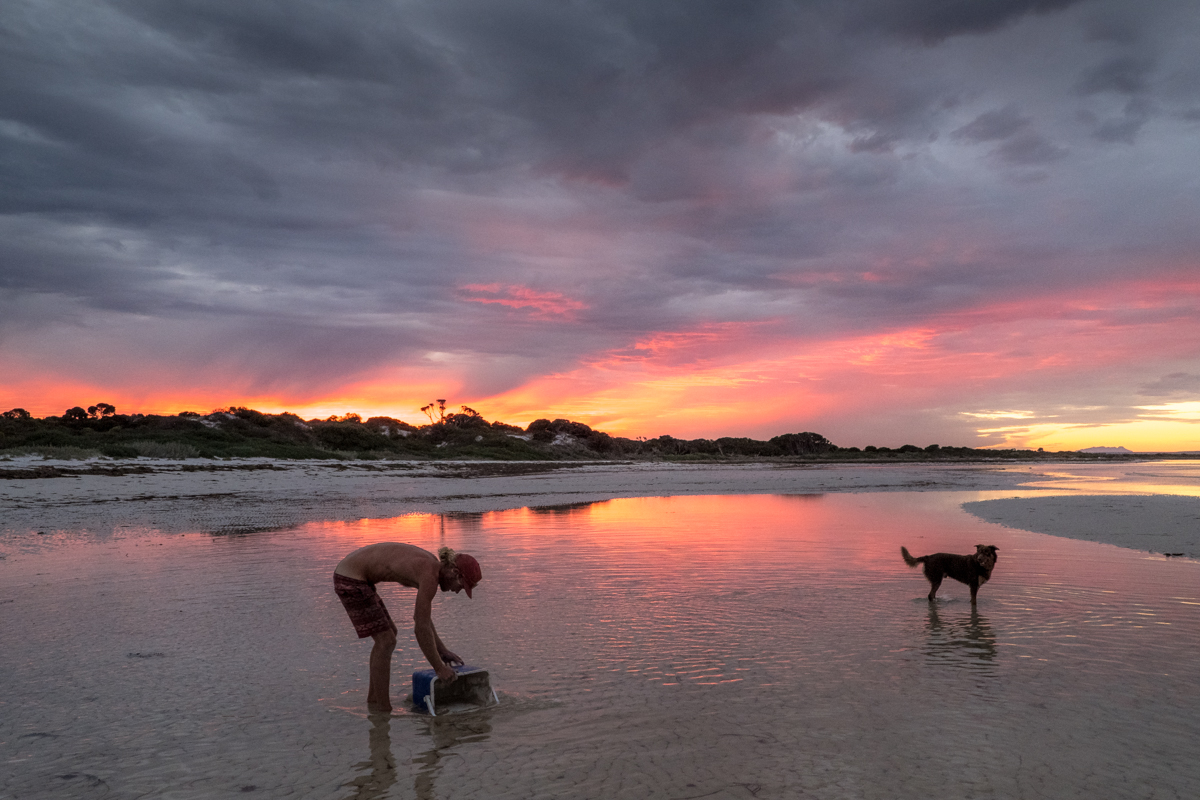 When we arrive at Point Malcolm the tide is up and a strong wind is blowing into the bay. It is murky and chopped up and the beach is clogged with decomposing seaweed. We make a camp at two picnic benches in a clearing of tea trees. There are no facilities, not even a long drop toilet. After lunch the wind and tide recede. The bay is now all long sandbars and clear, glassy pools.  Dolphins frolic in the deeper water, herding up schools of jumping bait fish.  At sunset, a bruised sky dances on the shallow water. This is not the kind of place that immediately strikes you as beautiful. It is a place where patience is vital and the wilderness and isolation can be terrifying until you surrender to its siren-like call. 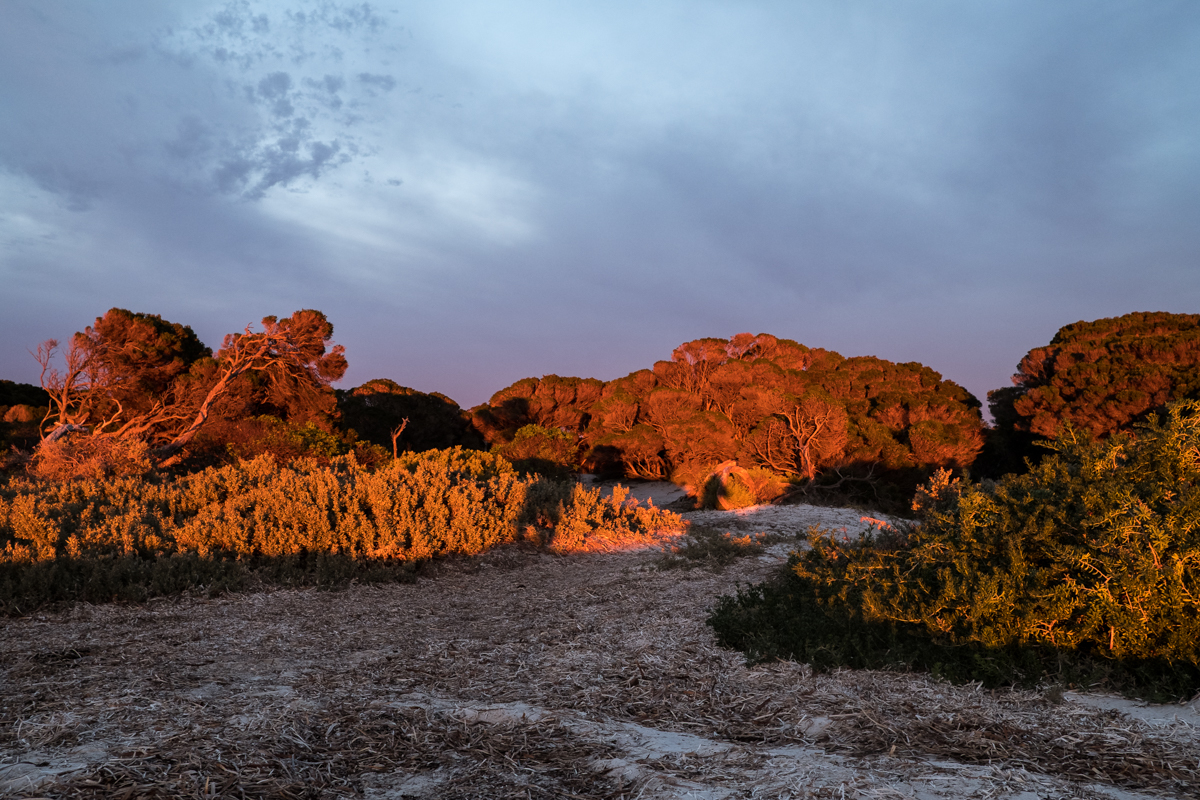 From Point Malcolm we follow a sandy track up to Israelite Bay. This settlement was once a hive of industry.  It was home to 150 people who worked at the telegraph repeater station, and loaded wool from nearby sheep stations onto ships at a timber jetty. All that’s left now are a few old graves, crumbling stone ruins, and the jetty’s rotting timber pylons. The only people within cooee are a few hardy abalone fishermen working from tin sheds. North of Israelite Bay the track forks in two different directions. An inland track runs 100 kilometres to Point Culver, but it is a sunny, windless day and we hope to travel along the beach. We arrive to find it piled with mountains of car-swallowing seaweed. We opt to follow a track a little back in the dunes, but it is scarcely a track. Driving 60 kilometres takes us six hours.  In the late afternoon a piece of bluebush tears a hole in the sidewall of a tyre. We make it to Wattle Camp just before dark.

Wattle Camp is an anomaly of pleasant-smelling wattle trees on a bare samphire marsh. Beneath the trees, old beer bottles and rusty cans are neatly lined in the dirt, relics of the linesmen who once worked this country. The coastal route the line took meant that heavy dews and sea mist often interrupted transmission, and it had to be maintained by men roaming about on camels. These cans and bottles are the only monument to their service. From the Wattle Camp we head back down to the beach.  It is clear enough of weed but the moon was full last night and there is now no beach to speak of. There is nothing to do but sit and wait for the high tide to recede. We let some air from the tyres, make a couple of cheese and salad wraps and have a quick fish. Three casts bring in a salmon trout and a banjo shark. Once the beach re-emerges we drive hard along the wet sand, passing the occasional sunbaking Australian sea lion. This beach is one of the most remote in the country but to my disgust it is littered with rubbish. We pass bundles of marine rope, fishing nets, washed up old plastic crates, PVC pipe, and dozens of bottles and splinters of plastic.  The rubbish that washes up here is only the tip of the iceberg. According to CSIRO research, there is 35 times more plastic on the ocean floor than what washes ashore. 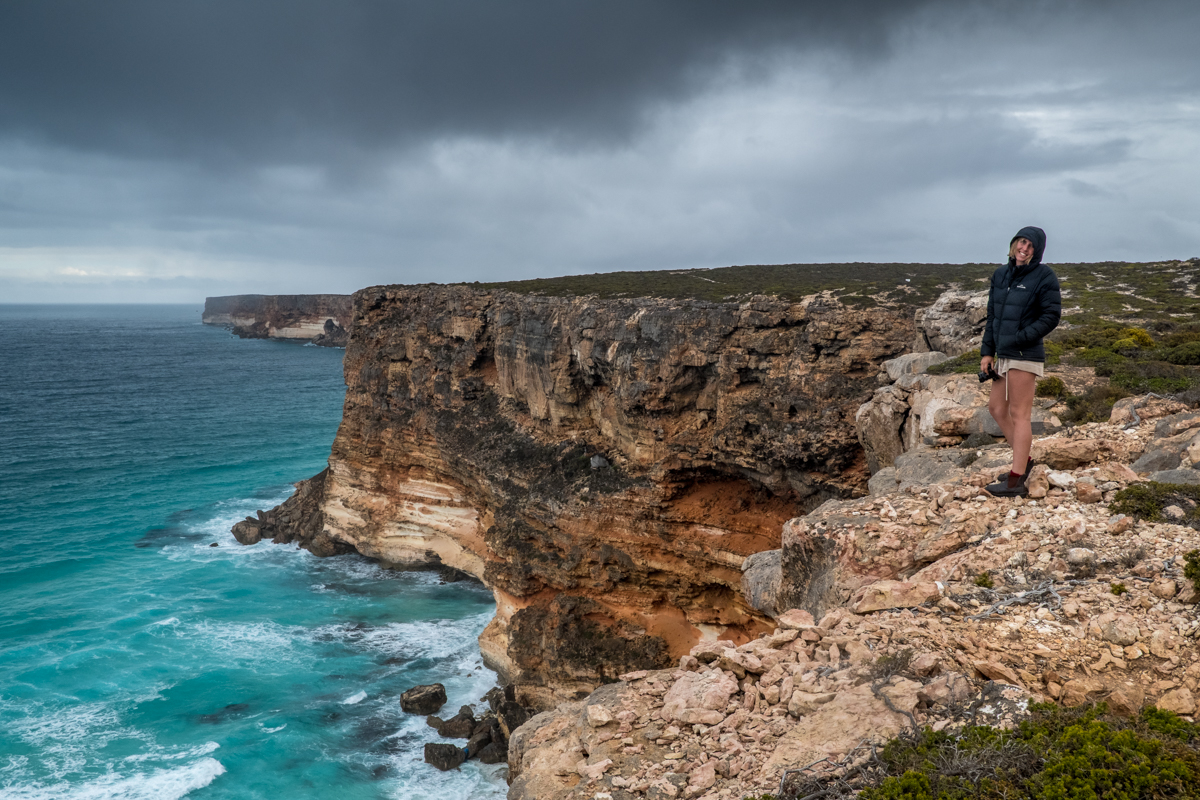 In the distance the great Bilbunya dunes tower overhead.  They are so pure white and surreal that from 30 kilometres away they look like mountains of caster sugar.  These 120 metre tall dunes are the biggest sand dunes in the southern hemisphere. You can actually see that they are live, the wind whipping at their peaks and constantly sculpting their form. In other countries the dunes might be a tourist attraction or a national monument, but out here there is nothing other than the dunes themselves to inform you of their significance. Europe may have its cathedrals and basilicas - this country here is a church of the open sky. We need to pick a way behind the dunes and ascend the Wylie Scarp to continue east.  We struggle to find a track. Finally, an upright whale jawbone and two empty oil drums mark the way. Near the top of the scarp, rubber matting has been laid to help with the climb up the very steep and sandy track.  We crawl up, heading away from the coast and into rough mallee scrub and limestone plain country. 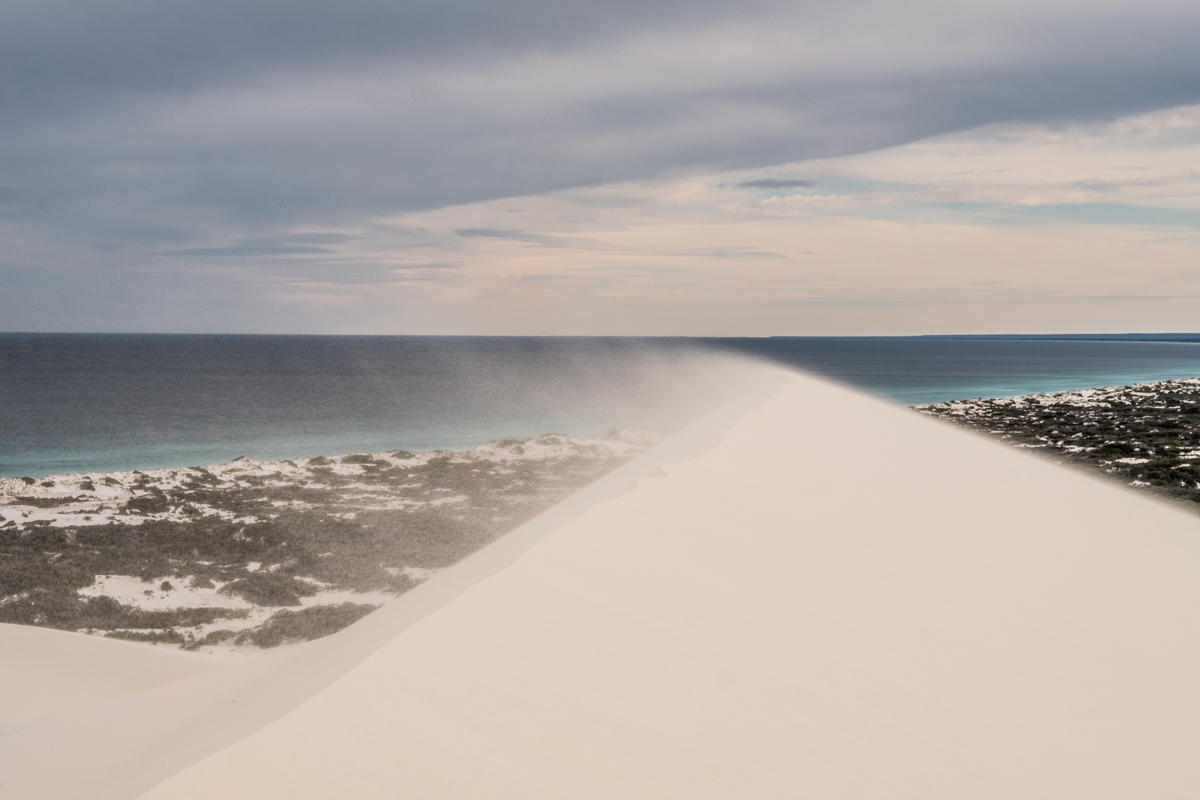 This Wylie Scarp, named in honour of Eyre’s travel companion, is an ancient uplifted sea bed.  For much of our journey it has appeared way inland beyond the salt and samphire flats. Now it swings sharply to the coast and we are on top of it. Looking down you can see how it holds the Bilbunya dunes in place, and falls away into the Southern Ocean at Point Culver, just a few kilometres to the east. It continues on as the longest unbroken sea cliffs in the world. Those sea cliffs posed an enormous challenge for the men building this line. The 17,000 jarrah bush poles they needed could only be brought in by ship, and there was almost nowhere to land them. Beyond Point Culver the only tiny let up in the cliffs is 60 kilometres east at Toolina Cove. The cove is a low rocky beach at the base of almost vertical cliffs. Looking down we see sharks chasing a school of salmon in the turquoise water. Landing the poles here was a feat of ingenuity, and bloody hard work. They would be unloaded from the ship onto rafts and brought ashore. Each 102 kilogram length of timber then had to be individually hand-winched up the almost vertical cliff face. Here they were loaded onto packhorse and carted to various makeshift bush stores.

We batter along, travelling at a speed not much faster than those men on their packhorses. Occasionally we pass an old telegraph pole still standing upright, or a rusting old ship’s boiler that was once a water tank for the men. There are some excellent bush camps but limited coastal access. At the turn off to Caiguna, the allure of a hot shower and a roadhouse meal proves too much. We turn north, the track growing smoother and wider. The old telegraph poles are all but gone. Two microwave-link towers rear up out of the bush and indicate the roadhouse up ahead. As we grow closer my iPhone starts pinging with messages and notifications. Each one beams across a giant cellular network at a speed and ease that this country could have once only dreamed of.

RFDS Woodcutters Fire Up for the Season

Behind the Scenes: Upward Spiral Roasting