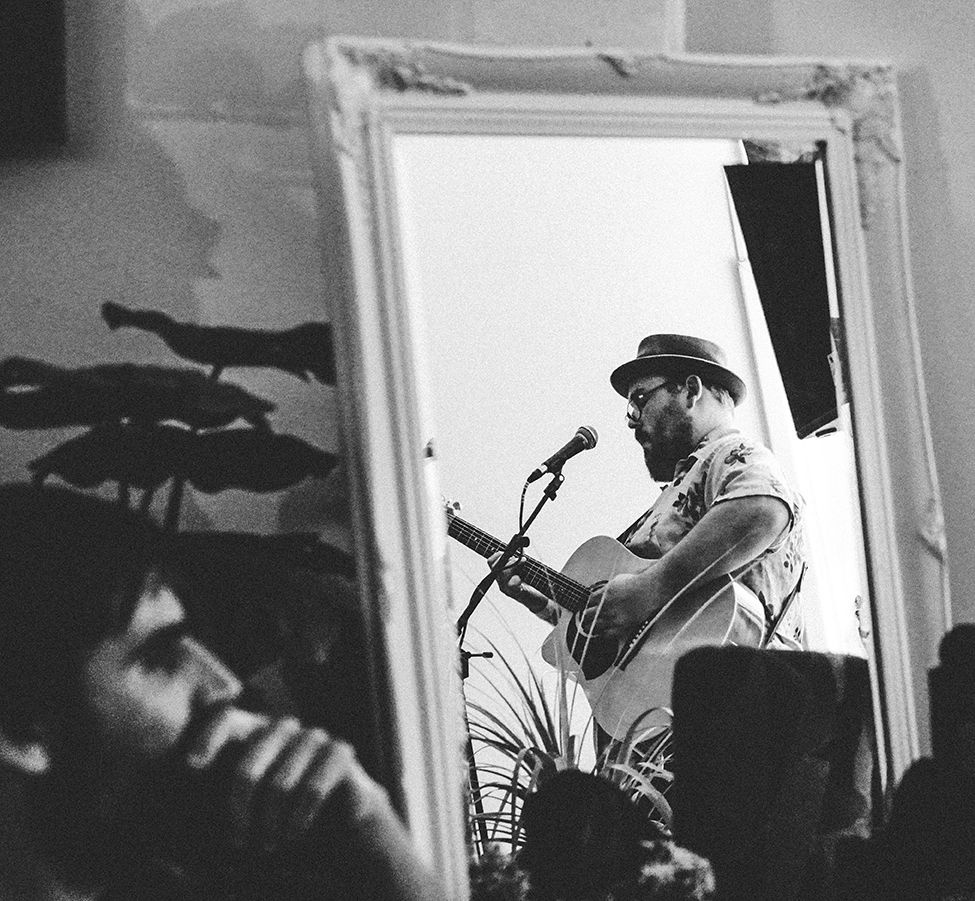 Up Next: Kyron Smithson

Music is one of those generic obstacles we dwindle over through headphones or a car stereo, or choreograph a few summer playlists and attend a few more local gigs in order to give ourselves character. It’s the best. Peers ask you who your favourite musicians are and refuse to take your feedback home because they’ve already decided they’re the pie-in-the-sky from the 110th time they’ve slain ‘ToTo’ by Africa, onwards. They want to define you by how much illicit content you listen to or what era you’d love to be reborn in because of it. I’m not talking about the kind of music every second middle-aged mum listens to in order to relive their youth, nor the artists who milk their satisfaction from making it.

I’m talking about the music that flips your stomach, tweaks nerves. Music that checks in to whether your soul is still in the hands of the devil and leaves you thinking not just about what your funeral ‘song’ might be but the kind of music your subconscious plays out in your dreams. I pay respect to live music, the music my dad listens to and soundtracks so I can soundtrack everything. I pay more respect to the level of creativity and otherworldly attempts musicians and composers pull-through to relive that ‘feel’ their frontal lobes went through that one time, in just three minutes. We should pay just as much, if not more to those who keep this alive.

We all have quick nicknames for many of our familiar faces in town. ‘Kyza’ swings through a crowded event scene or fanged loudly across the street. Quick, co-ordinated and a nice ring, we find we’ve mastered these two syllables just as well as basic grammar and our ABC’s. Kyron Smithson has pulled his finger out for our community. We are, in a way, in debt to his overwhelming support and unconditional love for every person and their left-hand friend. Speak of the devil he’s standing right in front of me.

I’m the left-handed friend but I’ve got two of them so am still yet to master his initial handshake and general jive each time we see each other. Kyron knows the lingo and is riddled with words urban dictionary is still half-hearted to understand. It’s fantastic. Both people-people, we can chew the crutch off a low-flying duck from talking too much at our heart’s desire. They usually are. Kyron has that poetic license to write incredible music solo or alongside band members Joe Franzone and Matt Cooper. Everyone is familiar with Grand Casual but I really want to talk about how Kyron, unknown to him, is an ambassador and ideal inspiration to those who wish to take on the world by their own terms. Be their own boss.

We all have a little bit of entrepreneur in all of us and in this day and age, people are finding more and more creative avenues to bring home the bacon and constructively give back to the community at the same time.

Many of Kyron’s outside musical influences started filling out the crevices of his to-be future musical career from a young age, perhaps a little later than the rest of us. Kyron’s first experiences with the stuff took place in his parent’s car from the stereo in small doses and then later, via the vocal cords of  Neil Diamond and Johnny Cash. His earliest memory of ‘good’ music was on one sunny Australia Day afternoon when he copped the tail end of one of Triple J’s earlier Hottest 100’s. The top three songs by Powderfinger, Custard and Kyron’s all-time favourite band Tool. Throughout his schooling, Kyron was particularly proud of his involvement in school musicals where he also had his first go learning guitar and may or may not have starred in the Sound of Music. He left that fact really open. Back then he rarely got a hang of instruments first go and settled into the familiar feel for university instead. Here he spent five years studying tourism management with a minor in marketing and then the following six working on his family’s farm. Steadfast, driven by experience and with a strong sense of wrong from right, Kyron threw himself headfirst into the idea of representing musicians in an aim to develop a better understanding of the talent that just happened to come so naturally to him and many Esperance locals.

Kyron has a great sense of community. Little did he know where he was going to stand 6 years down the track, today. But that’s just proof there’s no need to look too far in the future. It only puts off what can get done today. Pegleg or two left feet, Kyron has taken the first step for many musicians around town, followed the south-west coastline and on, onto Perth where he’s played numerous times with band Grand Casual. Fuel money or lack-of never got in his way. “The most successful musicians are the ones who work the longest and hardest.” It’s true Kyz, all of this goes without saying for anyone within any creative industry or those with any driven goal, give it a go. For those who want to get the job done properly; prepare to sacrifice blood, sweat and tears for a worthy cause.

While down at Down Town coffee shop and between jobs, I grilled the man some of the big questions too. I did come prepared for once and busied over them in-between conversation but didn’t interrupt anything so before my short-term memory kicked in, bolted home to the essentials: pen and paper. One thing that stuck out like a saw thumb between topics, lingering over scenarios, goal-setting and action; Kyron’s tolerance with people. Yes, us. He has to deal with us every day, all at arm’s length, he sees the bigger picture and can play out the consequences in his head before making better actions. A sure sign of patience. This includes palming out creative constructive criticism to the many musicians he represents. Kyron doesn’t shy away from the idea and quite enjoys handing people valuable feedback. Hard evidence proves that Kyron works words of wisdom throughout everything he contributes to. People mistake him for being busy when really he’s focused. Kyron means well and has full respect for the development of musical know-how. It’s different for everyone but can be a joint communal effort from all. With encouragement: an individualised stage presence, different from your neighbour but complimentary to Esperance’s ever-evolving music taste.

Follow-up on future events and everything Kyza has in store for the Esperance community on the next page. You may or may not have noticed but man-of-many-talents also takes on The Bridge in every issue and has a knack for great writing well worth killing a few brain cells for or reading allowed in the shower with you, yourself and possible friend.

Merve Guide: Are You Drinking Too Much?

Up Next: Twilight Yoga Festival