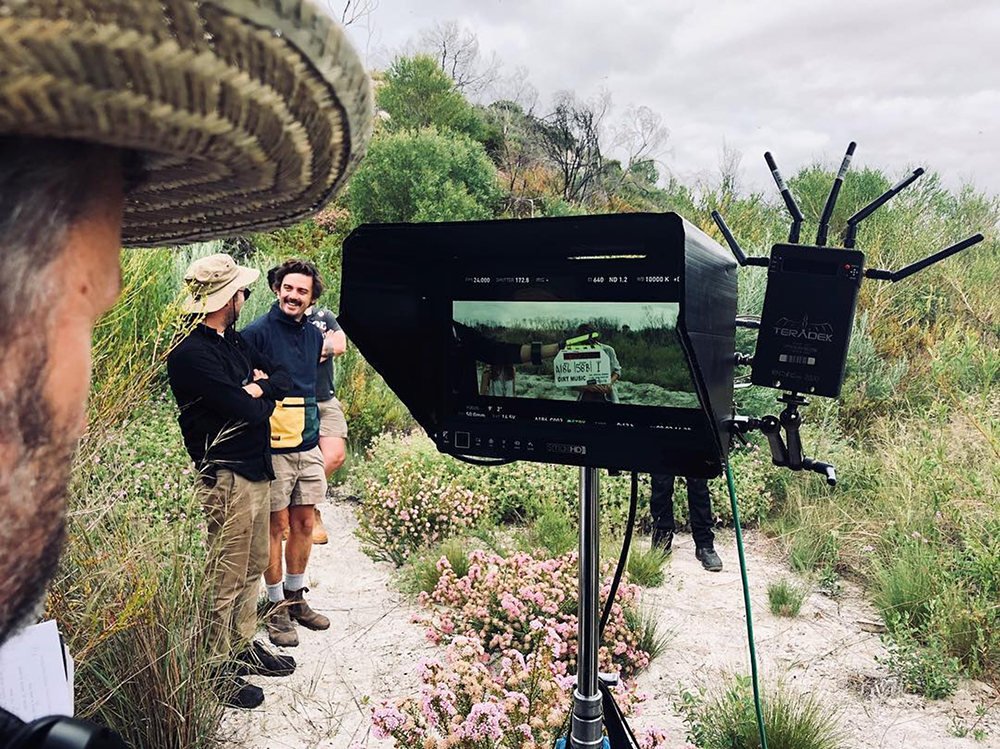 Recently, our town has been awash with intrigue, scandal, romance, danger, and glamour. An internationally acclaimed cast and crew have been based in Esperance, filming Tim Winton’s Miles Franklin award-winning novel Dirt Music. The last few weeks in Esperance have been a whirlwind of action in locations such as Twilight Beach, the Gibson Soak Hotel, Bandy Creek Boat Harbour, and the Wylie Bay dunes.

When I heard that Dirt Music was going to be filmed in Esperance, I was beyond excited. This book has consistently topped my ‘all time favourites’ list since I first read it, many years ago. Not only was the movie going to showcase my hometown, it was also going to feature big-name stars such as Emmy Award-winning Kelly MacDonald, whose resume includes films such as Trainspotting, and No Country for Old Men. MacDonald is just one of an all-star cast that includes Garrett Hedlund, David Wenham, and Aaron Pedersen, as well as the musical talents of Julia Stone. Dirt Music is being directed by Gregor Jordan, with credits such as Two Hands and Buffalo Soldiers in his resume, and a crew of producers that have a raft of award wins and nominations between them.

Dirt Music is a love story, but not the usual Hollywood type. When I first read the book, I was struck by Winton’s breathtaking descriptions, both of the coastal fishing town where the first part of the novel takes place, and of the remote coast of the Kimberley, where the novel comes to a dramatic conclusion. The love story between main character Georgie and tough outsider Lu Fox is haunting and beautiful, but that’s not what stands out most about this novel. Rather, Dirt Music is Winton’s love story about Western Australia, the stunning and occasionally treacherous coastline, and the tough, gritty people who live here. WA’s raw, breathtakingly beautiful, and sometimes dangerous coast is reflected in the raw honesty of the characters in Winton’s book.

The town of White Point in Winton’s novel is a rough little fishing town set on a beautiful stretch of WA coastline. The main character, Georgie, says of the town ‘…the landscape got its hooks in and people stayed.’ Even though the fictional town in the book is set a few hours north of Perth, the beauty of Esperance’s coastline makes it an ideal setting, and as many locals know, it’s certainly a place that gets its hooks into you. The turquoise ocean and white sand is also a good contrast for the lush tropical green and sunbaked red of Cape Leveque, the setting for the rest of the movie.

The gritty, tough country pub feel of the Gibson Soak was the perfect setting for the scenes set in the local pub. When I got the opportunity to go along as an extra, I jumped at the chance, mostly to have a look behind the scenes. Together with a group of locals, I gathered at the Soak for the day. Fitting with the ‘rough fishing village’ vibe, there were plenty of tattoos and dreadlocks on display, with thongs the footwear of choice for most. The normally peaceful Soak was bustling with cast and crew, with lights, costumes, and cameras being rushed around. Then, after our ‘prop’ glasses of wine and beer were in hand, and we were all positioned perfectly, the cameras were rolling. The actors wove among the local extras, and the vibe in the pub felt just like a warm summer’s afternoon, beer glasses clinking and excited conversation buzzing. Later on, the mood changed to a more mellow evening, with Julia Stone’s exquisite bluegrass music providing a perfect accompaniment. The final scene of the night, a rough pub fight, really showed what these accomplished actors were capable of.

There were 65 local extras for the scenes filmed in the Gibson Soak. As well as that, locals played deckhands and were extras for scenes filmed at Bandy Creek Boat Harbour. 15 locals were taken on as interns in areas like camera and art departments. The film crew also made use of local Jaimen Hudson’s expertise in shooting drone footage and some behind the scenes footage. More action scenes involving a car chase were filmed on Telegraph road, and scenes from the house where Georgie (played by Kelly Macdonald) and Jim (played by David Wenham) live overlook stunning Blue Haven. Additionally, students from local schools were also able to visit the set and talk about possible career pathways in the film industry with cast and crew.

With filming on the movie now wrapped, and production underway, there will be quite a wait until we can see the finished movie, with the release date not yet announced. I will be among the Esperance locals who can’t wait to see the resulting showcase of our beautiful town and state. We here in Esperance have always known how special this place is, and now the world will get to experience the wild and beautiful coastline of our spectacular home.

Up Next: Esperance Renewable Energy Project