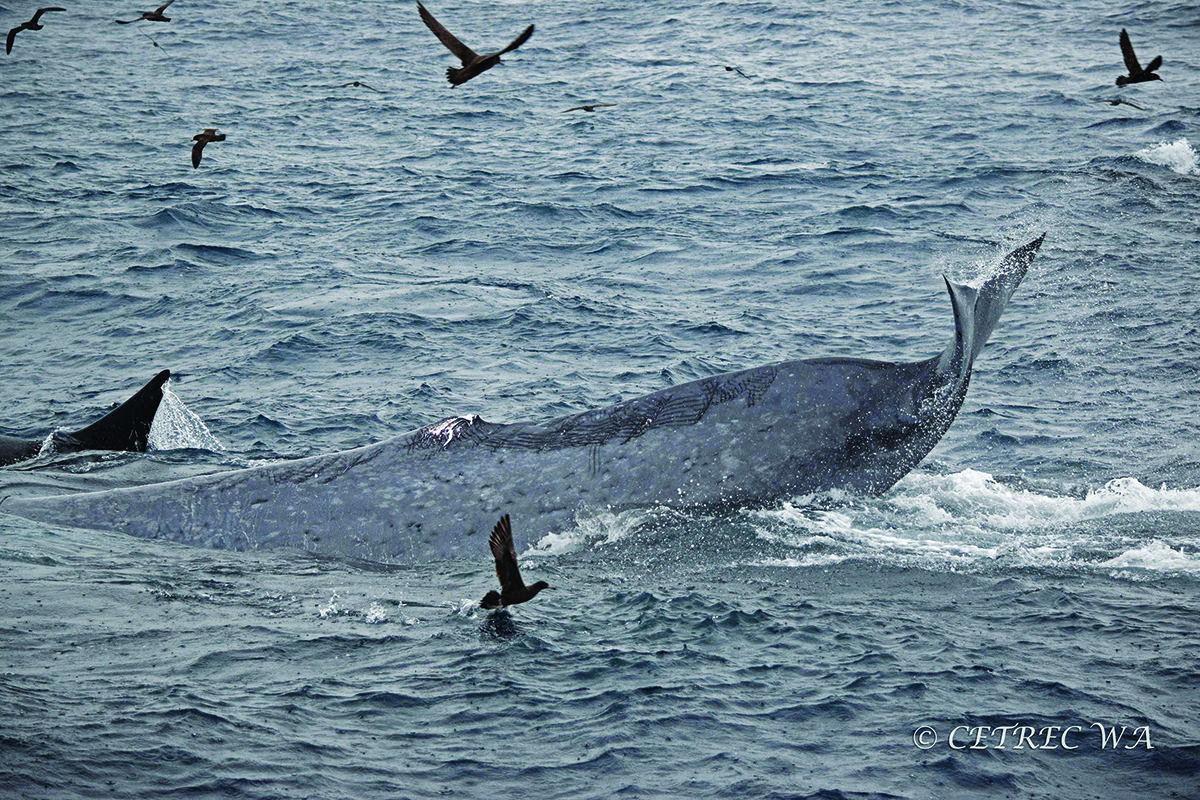 Blue whales are the largest animals that have ever existed, measuring up to 29 metres long, and weighing in at up to 136 tonnes. Aside from humans, blue whales are thought to have no natural predators. Recently, however, a team of researchers off the coast of Bremer Bay saw an unprecedented sight: a large group of killer whales teaming up to attack and kill an adult blue whale. The pod of around 50 killer whales surrounded the blue whale and took turns to attack it before enjoying a whale-sized feast. Researcher John Totterdell explains that this is a significant observation, as killer whales aren’t known to attack and kill larger adult whales. In fact, there has only been one other documented account of killer whales attacking an adult blue whale, and in that case, the blue whale was able to escape.

Esperance local John Totterdell has been studying sea life around the Esperance region and WA’s south coast for over thirty years, yet the ocean still regularly surprises him. Together with his research team (CETREC WA) and colleague Rebecca Wellard, John has been studying killer whales for years off the coast of Bremer Bay and further north. Killer whales are the ocean’s top predators and are intelligent and highly social animals. Their species name is Orca, and whilst currently, they are the only remaining species in the genus, Orcinus, so they are often referred to as Orcas, although scientists usually still use the common name killer whale. In the same family as dolphins, killer whales demonstrate sophisticated hunting techniques and a range of vocal behaviours. They are known to regularly kill smaller whales and the calves of larger whales such as humpbacks, taking several hundred humpback calves from the tropical Ningaloo region each season. This bloodthirsty behaviour is an important energy source for the recovering killer whale populations and also serves an important ecological function in keeping the humpback population from getting beyond carrying capacity.

The waters south of Bremer bay are a unique and very significant area for marine research. It is the only offshore location past the continental shelf where researchers have been able to observe the same killer whales in the same location, year after year. There are nutrient-rich upwellings in several canyons off the coast of Bremer Bay which attract rich sea life to the area, including pilot whales, sperm whales, common and striped dolphins, giant squid and a variety of other sea life as well as the killer whales. John and the other CETREC researchers have been able to identify around 200 individual killer whales around the Bremer Bay area. Each individual killer whale has unique identification marks on their dorsal fin, eye patch, and saddle patch. Photographing and documenting these markings is the most common way that individual animals are identified. Sometimes the team also takes biopsy samples, which also allows them to identify sex, diet and familial relationships to other killer whales. Occasionally satellite tags are also used to monitor movements and dive profiles of the separate smaller family groups.

John, Rebecca and renowned cetacean researcher Robert Pitman were recently part of a team that made a breakthrough in killer whale research while on a trip to the notorious ‘Drake Passage’ off the southern tip of Chile. The researchers observed a large group of Sub-Antarctic killer whales identified as ‘Type D’, possibly a genetically distinct group with blunt heads, tall pointy dorsal fins and very small white eye patches. ‘Type D’ killer whales were previously observed only once when a group of them were beached in New Zealand around 60 years ago. The ‘Type D’ killer whales were thought to be a genetic aberration. It is amazing that such large animals have gone undocumented for so long. John stated, “In this time of diminishing biodiversity, we’ve found a big, strange, different looking killer whale that we didn’t know was out there. This was an animal that scientists thought had died out.”

As for the attack and killing of the blue whale by the killer whale pod near Bremer Bay, it is unclear what significance this event has at this stage. Perhaps it is a sign that food stocks late in the season are becoming low for the killer whales in the area? Perhaps the animals are becoming bolder and may attack other adult whales in future? Whatever may unfold, it is certain that the Bremer Bay area will continue to play a significant part in research on killer whales. The ocean is a place of great mystery and wonder, particularly in this biodiversity hotspot. We will be watching with great interest to see what other amazing discoveries are made by researchers in this area, and look forward to learning more about the fascinating killer whales.

Killer whales are not seen around Esperance very often, but have been spotted occasionally, with a sighting a year ago around Cape le Grand. Southern right whales are more often seen in the Bay at Esperance, as they migrate from the Bight. Sightings usually occur in winter and spring. Humpbacks are also sometimes seen off the coast of Esperance, more often in early winter.

The Burgers Are Better In Esperance