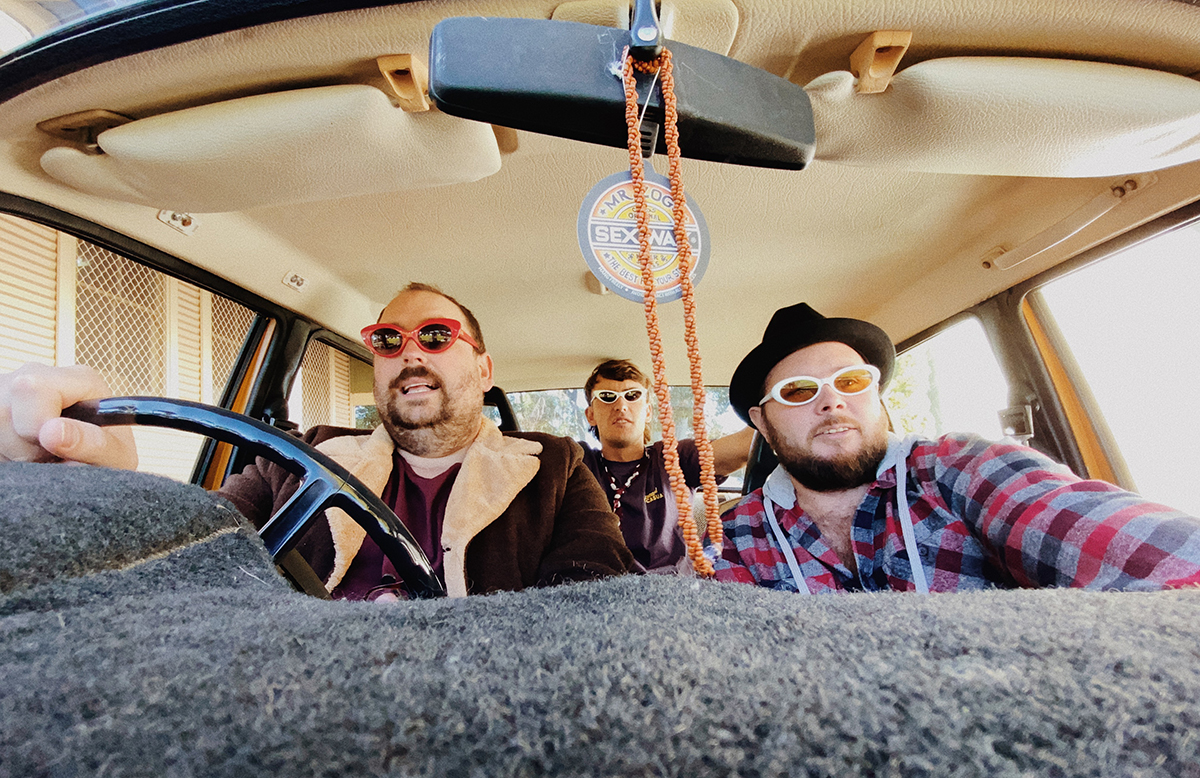 Talking lockdown and their new track.

After earning nominations for Best Regional Act at the WA Music Awards in 2018/2019, home-grown three-piece alt-rock band, Grand Casual, have been consistently pulling out good music, releasing their most recent track “Western Border” in mid-April. This song is full of energy, a six-minute emotional journey proving just how talented these guys really are. Listeners beware: it will make you miss live music, a lot. If you didn’t know already, Grand Casual consists of frontman Kyron Smithson, drummer Joe Franzone and guitarist Matt Cooper. I thought I’d check-in to see if the boys were still alive and kicking…

I’m sure many of your plans had been turned upside down this year due to the pandemic. How has ISO been going for Grand Casual, what have you guys been up to?

If you ever wanted to see the music industry shaken violently by the throat COVID-19 was the instigator. In a way, for Grand Casual it has been positive. We returned to the jam room fresh with a renewed thirst. “Western Border” was released in mid-April and allowed momentum to keep ticking over with that further spurred on by a focus on recording in August. To be honest, we were unsure whether we would be able to record, though recent variations to travel restrictions have cleared the pathway to the studio, excited is an understatement.

Your latest and greatest track, “Western Border”, is playing on my Spotify as we speak. Can you tell us what the song is about?

Solid lyrics tend to come into the songwriting mix long after the melodies are set in stone, and the theme/story behind those words are born from overall track tone. The song has two distinct parts, the first half talks about the pressure to succeed, those moments where you have to put everything aside and focus on the goal at hand and believe in yourself, that you will find the other side. Now, all that stress can be draining and the hip hop influenced the second section of the track talks about our need to recognise those successes, cast caution to the wind and just have an epic damn time, catharsis at its best.

You’ve mentioned that “Western Border” is your favourite song yet. How does it compare to your previous songs?

Our releases so far have demonstrated a diverse range of sound from classic rock and roll (like “The Sound”) to new age contemporary vibes (like “Stationery”). “Western Border” feels like the track where Grand Casual found our own voice, each of us contributed equally in creating something that is distinctly GC. On the recording, I feel we captured the live vibe of the tune exceptionally well, it’s going to be a particularly difficult release to follow up.

Is this your first time adding in a bit of vocal hip hop to the mix? Is it scary adding new styles to your setlist or does it just come naturally?

“Western Border” was the first tune that delved into the hip hop realm. I have a deep renewed appreciation for hip hop artists, it’s challenging to get the lyrics to flow and match the beat. There is this constant rewriting and elimination of words and syllables. Scary, not as such, there is certainly some apprehension the first time you perform it live, and a curiosity in how it will be received. I wouldn’t say it comes naturally, for “Western Border” a rapped verse suited where Joe took the beats and bass. Moving forward the style has popped up in another of our tracks immortal and no doubt will continue to evolve as an element of the Grand Casual sound.

The artwork for your new single is pretty epic. What was the idea behind the collage?

The artwork came from the creative minds of Franzone and Cooper. They hacked the GC bank account and printed out a heap of classic shots we have collected over the past three years, taking the time to slowly assemble them into full collage format. The original product is bloody outstanding and currently lives in Matt’s house, 50cm squared I should think, and a fantastic homage to the journey we have taken as a band thus far. “Western Border” was the final song to be released from our first round of recording in Perth, the album artwork is a reflection of our work to that point. Sarsby Martin developed the super sleek border and installed the “Western Border” font rounding out a really nice piece.

How long does it take to polish off a tune and, how do you know when it’s ready for release?

Over the past three days, we have been working on a new track, a process that involves a lot of scratchy phone recordings, replays and breakdowns. Our Facebook messenger gets hammered post-jam with ideas and potential variations. It could take us a day or two weeks before we are super comfortable with a finished structure. My lyrics and Matt’s guitar tones tend to evolve over the next six months, a period that would generally include playing the track live multiple times. Building towards recording now, we have selected the tracks we intend to record, and are slowly playing them to death tweaking all aspects. Needless to say, it’s a long process from first writing to recording, though a shorter track from writing to performing. It’s nice to be able to get feedback from fans and audience before committing to recording a song, you wouldn’t want to record something people think is a fail.

Writing and recording is the simple answer. Currently working on two new tunes were vibing, and hope to generate more material before we return to the live arena. The first week of August marks our return to Perth to record. Aiming for between 3-5 tracks. Looking at the potential to create a coupla quality videos to support the release of the upcoming tracks, our videos have been fairly low level though super fun productions to date, we would love to change that scenario. You may see us back in the live arena sooner rather than later, with a few ideas being thrown around regarding Grand Casual stripped back, stay tuned on that front.

Lastly, if you could describe each band member with just one word, what would it be?

You can listen to Grand Casual’s latest track, “Western Border”, and many of their other great tunes on both Spotify and Apple Music platforms as well as Triple J Unearthed and Soundcloud. Show your support by giving them a follow and don’t forget to play on repeat!

Up Next: 10 Years & Counting For s’juice